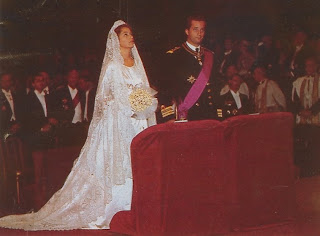 As The Cross of Laeken reports it is the Golden Wedding Anniversary of Their Majesties King Albert II and Queen Paola of the Belgians. Their 50 years of marriage have made them the most long-lasting married couple in Belgian royal history; though it certainly has not been without its rough patches. Nonetheless, they have been of great service to their country no doubt will continue to do so in the years to come. They have managed to maintain the tradition of the monarchy being the glue that binds all Belgians together just as they seem to have overcome their own problems and remained together as a comfortable and happy couple. The Mad Monarchist extends heartfelt congratulations to their Majesties on their 50th Anniversary.
Posted by MadMonarchist at 12:32 PM