14 July: A Sad Day for All Monarchists 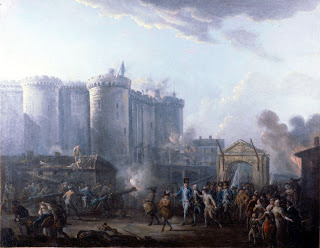 Today is a dark day for monarchists, royalists, traditionalists, anyone who is religious, anyone with an ounce of decency, dignity and a respect for the sacred. It is the national holiday of the French Republic; Bastille Day. It was on this day in 1789 that Parisian mobs stormed the prison-fortress, the Bastille, freed the prisoners, killed guards, beat the governor half to death, cut his head off and put it on a pike. It came to be seen as the first violent strike of the horrific French Revolution. First, however, there are, as with many things involving the French Revolution, some myths that need to be constantly opposed. Despite what is widely believed the Bastille was not some horrible chamber of tortures. It looked rough and imposing from the outside, but it was not that bad. Furthermore, it was hardly being used. All the revolutionary mob did in storming the Bastille was to kill some innocent men such as the guards and governor and liberate a mere handful of petty criminals and some lunatics. Such was the "glorious" start of the Revolution.

Ever since Bastille Day has been used to celebrate the French Revolution and the first step on the road to the destruction of the Ancien Regime. It is no overstatement to say that this was a calamity for all of Europe and even for the entire world. The French were the first to suffer but they were certainly not the last. First of course there was the revolution itself, the regicide of the King and Queen, the horrible, slow death of the poor, little Dauphin and the Reign of Terror in which tens of thousands of people had their heads cut off. Also remember that this was not directed only at the aristocrats, it was the common people who suffered the most. It began with the persecution of the nobility but many of them fled or even joined the Revolution and the majority who were killed were ordinary people swept up in the bloodlust. In the wars that followed the Old Order of Europe was shaken to its very foundations, the Holy Roman Empire fell and Christendom would never be the same again.

The roots of the French Revolution ran deep but the effects have been greater than probably any other revolution anywhere in the world. It can be seen even in the 20th Century with the Bolshevik Revolution and the formation of the Soviet Union. They used many of the same names as the French Revolutionaries used and even adopted the Marseilles as an official song alongside the Internationale. The French Revolution model of massacring royals, killing off all resistance, declaring war on religion and trying to remake all of society along some artificial, ideological pattern was one that would be followed across Europe, Africa, the Americas and even East Asia. It is very safe to say that had the French Revolution never happened, or had it failed, the world we live in today would be very different and, without a doubt in my mind, very much for the better. As just one example of how far-reaching the French Revolution was, in 1945 when the Communist-led August Revolution was sweeping across French Indochina, the last Emperor of Vietnam was urged to escape to the Imperial Tombs and try to maintain himself there, but the
Emperor pointed out the fate of the tragic King Louis XVI and asserted that it would be the death of them all if he stood opposed to the revolution.

On the 14 of July every monarchist should be French, and if you have a flag pole, let the lillies of France fly and let everyone know why. The French Revolution is bigger than France alone and all monarchists of every background should not rest until it is known and rejected for the utter horror that it was. Vive l'Roi!
Posted by MadMonarchist at 1:14 AM