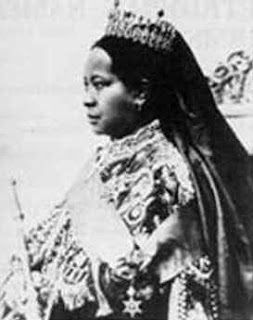 Born in 1876 Zewditu (originally Askala Maryam) was the eldest daughter of Negus Menelik of Shewa who later became Emperor Menelik II of Ethiopia. In 1882, when she was only 6 years old, she was married to Ras Araya Selassie Yohannes, son of Emperor Yohannes IV, the rival of her father. The marriage was supposed to cement an alliance between the two families but in time Menelik rebelled against Yohannes IV anyway. When Araya Selassie died Zewditu returned to her father in Shewa in 1888 and tried to stay friendly with her own family and her former in-laws. She had two other brief marriages before finally finding some domestic happiness that lasted a while with her last husband Gugsa Welle. In 1889 Yohannes IV was killed at the battle of Gallabat fighting the Sudanese forces of the self-proclaimed Mahdi Muhammad Ahmad. Her father quickly seized power and was hailed as Emperor Menelik II.

As the eldest daughter of Menelik II (who had only daughters) Zewditu would be the last direct, male-line descendant of the Solomonic dynasty of Ethiopia which based its power on their legendary descent from King Solomon of Israel and the Queen of Sheba. However, when Menelik II died in 1913 she did not immediately come to the throne as her nephew, Lij Iyasu had been chosen by Menelik as his successor. Fearing Zewditu, Iyasu had her and her husband exiled as soon as he took power. However, Emperor Iyasu V was widely unpopular among the traditional elites of the country both because of his odd behavior and his alleged Muslim sympathies. In quick order Iyasu was declared an apostate, overthrown and Zewditu was recalled to Addis Ababa and proclaimed Empress though she would have to have her cousin, Ras Tafari Makonnen, as regent and heir to the throne.

As Empress of Ethiopia Zewditu was the first female monarch of a modern African country though her reign was far from untroubled. Her largest base of support came from the conservative nobles and the Ethiopian Orthodox Church. They also tried to seperate her from members of her family they considered bad influences. Empress Zewditu was a very traditional, religious and unambitious woman who was torn about becoming Empress at all. She felt it was essential to remove Iyasu from power but it pained her deeply to have replaced the man her beloved father had chosen to succeed him. She devoted most of her time to prayer and fasting while Ras Tafari became the major power at court. Early on however, the country was torn by still more civil war when Iyasu escaped from prison and allied with Negus Michael of Wollo in an effort to retake the Ethiopian Imperial throne. When his forces were defeated and Iyasu captured Empress Zewditu tried to have him placed under her care where she could see that he was well treated and provide him with some religious education. The court absolutely refused but Zewditu did what she could to make Iyasu's confinement as comfortable as possible.

Empress Zewditu withdrew more and more from public life as Ras Tafari Makonnen became more and more the leader of the country. She was distressed by the many reforms and innovations her successor was pushing to modernize the country. Zewditu was a devout Coptic Christian and a fervent defender of traditional Ethiopian life. She continued to devote most of her time to prayer, religious studies and building churches. When a conservative coup against Ras Tafari failed she was obliged to make him a Negus to further cement his position as heir to the throne. When word came that her husband had died in battle in an attempted rebellion against Ras Tafari she died not long after on April 2, 1930, whether as a result of ailments she had long been suffering from or heartbreak over her husband's death, remains debated. Upon her death Negus Tafari became Haile Selassie, the last Emperor of Ethiopia.
Posted by MadMonarchist at 12:30 AM