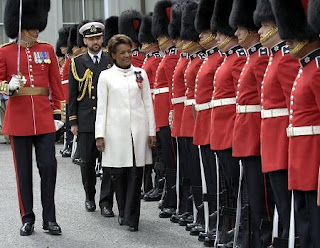 One of the most famous regiments in the Canadian Forces is the Canadian Grenadier Guards. Although it traces its origins back to the earliest days of Canada it was officially born as the "First Regiment Canadian Grenadier Guards" in 1914 and was given the status of a household regiment; which is to say a royal guard which has the duty and honor to guard the monarch of Canada. The regiment contributed fighting men to many battalions during the First World War and by the end of the war King George V granted them the honor of being addressed as Guardsmen. They were officially allied with the Grenadier Guards of Britain and this special relationship has been maintained ever since. They were mobilized for action in World War II and earned battle honors across France, Belgium, Holland and Germany. Members of the Guard also served in the Korean War and more recently units have served in the former Yugoslavia and Afghanistan.

An elite and famous fighting force the Canadian Grenadier Guards are most known for their ceremonial duties such as guarding the residence of the Governor-General of Canada at Rideau Hall and Parliament Hill. The changing of the guard is always a must-see for visitors to Ottawa and, as a guard regiment of household troops the Canadian Grenadier Guards also travel to London when their turn comes to stand guard at Buckingham Palace; the primary residence of the Queen of Canada.
Posted by MadMonarchist at 12:16 AM