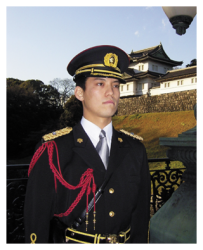 The modern Japanese Imperial Guard is a far cry from what it used to be but is no less effective at its primary duty of protecting the Emperor of Japan, the Imperial Family and their residences. The modern Japanese Imperial Guard was formed in 1867 as part of the Imperial Japanese Army. Their style was very French though after 1870 the Japanese imported German military experts to train them. The Imperial Guard served in the victory over Russia and was greatly expanded, including two brigades made up entirely of natives of the island of Formosa (Taiwan). During World War II Imperial Guard units were sent to serve in southern China and in the occupation of French Indochina (Vietnam). Later Imperial Guard troops fought in the victorious campaigns in Malaya and Singapore. Their reputation was tarnished over these events when evidence was produced after the war at war crimes trials that members had participated in several atrocities. With the Japanese surrender in 1945 and the occupation of Japan by the United States the Imperial Guard was abolished (as was the Imperial Japanese Army as a whole) but in 1947 it was reformed as part of the National Police Agency.
The modern Imperial Guard of the Police Agency consists of some 900 members and are charged with the protection of the Emperor, his family and properties. They also train as fire-fighters to be prepared for any fires in the Imperial Palace complex. Men and women alike serve in the guard today and are a highly trained, proud and efficient security force that has been called on to fend off potential attackers and recently had to perform the unusual task of dealing with a drunken, naked foreigner who decided to go for a swim in the imperial moat!
Posted by MadMonarchist at 5:08 PM