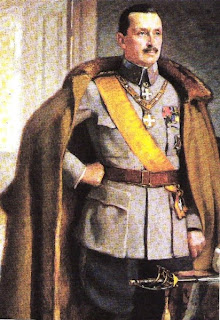 If there is any one man who could be called the “father” of modern Finland it is Carl Gustaf Mannerheim. Born in 1867 to noble Swedish-Finnish family that had lost its fortune, Mannerheim grew up as an impetuous and somewhat rebellious youth. Discipline problems scratched his plans to join the local Finnish army and so he opted for the Imperial Russian Army (Finland being, at the time, a Grand Duchy in the Russian Empire). He married but later separated from his wife and seemed to have little prospect of advancement until the outbreak of the Russo-Japanese War. Volunteering for service in the Far East Mannerheim proved his skill and courage quickly and was promoted to colonel for his actions at the battle of Mukden in Manchuria. After attending the last meeting of the Finnish Diet he was sent on a secret intelligence gathering mission through Turkestan to Peking. The “Great Game” between Russia and Britain was still lingering on and the Russian high command wanted to know what the prospects of a Russian invasion of western China would be and how much the Qing Imperial Army had modernized.

Mannerheim undertook the mission with considerable zeal, carrying on even after setbacks that would have discouraged most others. He reported on the attitudes of the ethnic minorities toward the Han Chinese, noted the anger in Inner Mongolia over Han encroachment and met with the “Great Thirteenth” Dalai Lama of Tibet. After reaching Peking and reporting on military, social and educational advancements that were underway as well as the increasing interest of Japan in the region after which he returned home via the Trans-Siberian railway. Resuming his military duties he was posted to Poland and then to the court of Tsar Nicholas II. When World War I broke out he again gave valuable and gallant service to the Russian Empire during the campaigns in Hungary and Romania. For his service he earned the Cross of St George, of which he was justly proud, and promoted to command a cavalry division.

However, for Mannerheim as with many others, the outbreak of the Russian Revolution changed the course of his life forever. Disgusted by the Bolsheviks he was determined to fight them to the last and was part of the “White Russian” opposition. However, he was also torn by his nationalist desire to see his beloved Finland independent and his loyalty to the Tsar whom he had so faithfully served. That little dilemma took care of itself when the Romanov dynasty was overthrown and the choice of an independent Finland or a communist-dominated one was easy for Mannerheim to make. Returning to his homeland he organized White forces to beat back the Bolshevik onslaught while Finnish patriots organized an independent government. Aside from the communists, who were always a minority among the Finns, there was division between those who favored a republic and those who favored a monarchy. The German Empire was supportive of the Finns and the choice of a German prince as King of Finland would ensure German favor while the western Allies would oppose such a move.

Mannerheim was a military man from the start, not a politician, and there has been some debate as to which side; the republicans or the monarchists, that he truly favored. For most it should be clear that Mannerheim favored a monarchy but I shall let Mannerheim speak for himself. As commander of the Finnish White Guards he said, “The army considers it their duty to openly state their wish that there will be guarantees to avoid the recurrence of those conditions (conditions leading to the Civil War), by creating a form of society and government that will forever protect us from a similar period of terror that our country has just escaped. The army regards as the only guarantee that the navigation of the state ship of Finland is entrusted in firm hands, which cannot be touched by party disputes and need not submit to compromises, sell power at bargain prices.” It certainly sounds as though a monarchy was what Mannerheim considered ideal.

However, as Germany was crumbling away in defeat toward the end of 1918 the monarchist position gave way as everyone knew the Allies would be against such a thing considering that it was a German prince, Frederick Charles of Hesse-Kassel (the Kaiser’s brother-in-law no less) who had been chosen to be King of Finland. Some in the army and White Guards especially wanted to make the hero Mannerheim King but nothing ever came of that idea though he did maintain order as regent until a government, now republican, could be organized. He obtained recognition of Finnish independence from Great Britain and America and organized food relief to be sent in to avoid starvation. The United States would later gratefully point to Finland as the only country to repay the war debts to America on time. When a government was organized Mannerheim stepped aside though he was already being attacked by liberals (socialists) for his staunch opposition to the communists. Mannerheim himself was less than impressed with the government, holding a rather low opinion of all politicians as creatures who stirred up divisions amongst the populace simply to further their own careers and increase their own power. Imagine that.

Mannerheim knew that Finland was not in the clear yet. His experience fighting the Bolsheviks gave him a clear understanding of their goals and he knew that, no matter how much they despised Imperial Russia, they would do all in their power to retain and retake every inch of what had formerly been the Tsar’s empire. As usual, Mannerheim was right and soon the new Union of Soviet Socialist Republics had annexed Estonia, Latvia and Lithuania after luring them to a conference to discuss political issues. He continued to support the conservatives in Finland but he spurned the suggestion of some on the radical right that he become dictator. Nonetheless, Finland was soon forced to turn to him for help in their greatest crisis since becoming independent. In 1939 the USSR summoned Finland to a conference just as they had the Baltic states and made extensive territorial demands. The Finns refused to surrender their territory and Mannerheim returned to duty as Field Marshal of the Finnish army to face the threat of a Soviet invasion.

It was a seemingly impossible task that faced the battle-hardened aristocrat but he went to work with care and vigor. Plans were drawn up to protect the populace, preparations were made for land, sea and air attacks and defenses were erected including a fortified line across the Karelian isthmus known as the Mannerheim Line. When the Red Army invaded the Soviets claimed they were only defending themselves (which became quite a joke in the international community) and commissars told the Russian soldiers that the oppressed Finns would welcome them with open arms. To say that Moscow, and the world, were stunned by what happened next would be an understatement. The over-confident communists walked into a firestorm of fierce Finnish resistance. Using hit-and-run tactics, concealed fortifications, ambushes and their knowledge of the terrain the Finns decimated the Soviet Red Army. Again and again the communists walked into Finnish traps, their situation not being helped by the fact that many of their troops were raw conscripts and their officer corps had recently been thinned of talented leaders by a massive military purge carried out by Joseph Stalin.

Mannerheim, it seemed, had thought of everything and though pushed to the breaking point his clever tactics and tenacious soldiers inflicted ruinous losses on the enemy. Yet, they knew they could not hold out forever against the Soviet hordes and, aside from some brave volunteers from Sweden and Norway and the like, no help was forthcoming for Finland. Adolf Hitler did offer to send a considerable number of expert German troops to help but Marshal Mannerheim rejected the offer. Naturally he did not wish to offend the only world leader willing to help but neither did he want to become a satellite of the Nazi regime. The Finns fought on alone to the bitter end when the Soviets, shaken to their senses, called in hordes of reinforcements to overwhelm the gallant Finns. A peace was negotiated with Finland losing extensive territories to the Soviet Union but, unlike the Baltic states, they kept their independence and could hope to retake what they had lost some day.

Mannerheim was the national hero of Finland and when the Axis forces invaded the USSR in World War II he took his troops into battle once again. In 1942 Hitler had met with Mannerheim but it was a less than cordial visit. Mannerheim would not receive him in any way that would make it appear to be an official visit or an endorsement of the Nazi leader and the assembled company gasped when Mannerheim boldly lit up his cigar in front of the notoriously anti-smoking Nazi dictator. Finland did go to war again against the USSR in conjunction with the Axis invasion but with very limited war aims that were in any event lost when the tide turned in favor of the Allies. After World War II ended in defeat for the Axis the Republic of Finland was the only country bordering the Soviet Union to retain its independence and a great deal of the credit for that must go to Marshal Mannerheim, particularly for the sound thrashing he gave the Red Army in the Winter War, known in Moscow as the “grave of the Russian field army”.

No less a figure than Stalin said that were it not for Marshal Mannerheim Finland would have been a Soviet satellite. After the war Mannerheim briefly served as President of Finland but politics was never to his liking and viewed his time in office as he had his military service; a duty that was imposed on him rather than something he sought for himself. He was never comfortable dealing with parliament and at his age was often ill and unable to devote his full time to his presidential duties. Mannerheim died on January 27, 1951 after a lifetime of service to his country. Widely celebrated around the world he still considered the greatest and most honored national hero in Finland today.
(For more information and fascinating stories on Marshal Mannerheim there is a wealth of information at the excellent blog The Sword and the Sea.)
Posted by MadMonarchist at 12:42 AM