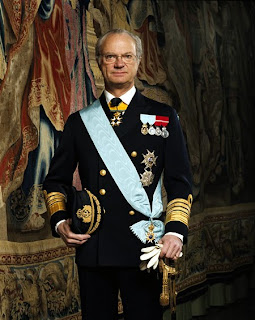 Name: The Kingdom of Sweden
Reigning Monarch: His Majesty King Carl XVI Gustaf
Reigning Family: House of Bernadotte
Status: Sweden is quite unique amongst the remaining monarchies of the world. The current royal family descends from a Marshal of France who was originally a republican revolutionary. Once an absolute monarchy and the dominant power in far northern Europe, today Sweden is a constitutional monarchy and officially neutral. Gustaf V was the last king to take an active role in Swedish affairs and since his reign the power and role of the monarchy has been drastically cut back. Today the King of Sweden has no political authority or official role in government at all but is a purely ceremonial figurehead of state. Still, the symbolic significance of the monarchy is important, both for the unity of the people and the history of their country. The King opens parliament, represents Sweden at home and abroad and awards Nobel prizes. Although opposition exists even the most strident leftist would have to recognize the stabilizing benefit of the monarchy. Today Sweden has a government that holds all power, one of the most socialized economies in Europe and a predominately non-religious population yet has never had a violent revolution.
Posted by MadMonarchist at 12:12 AM