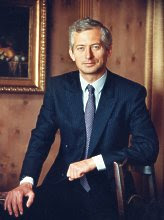 Name: The Principality of Liechtenstein
Reigning Monarch: His Serene Highness Prince Hans-Adam II
Reigning Family: House of Liechtenstein
Status: One of the oldest polities and ruling houses in Europe Liechtenstein was formerly part of the Holy Roman Empire as an Imperial Principality, then a member of the Confederation of the Rhine and then the German Confederation before becoming totally independent in 1866 under Prince Johan II. Originally an absolute monarchy, Liechtenstein adopted its first constitution in 1921 though according to that constitution the Prince retained considerable powers and a central role in government. The Prince could veto bills, call referendums, propose bills and dissolve parliament. To the consternation of many in Europe in 2003 a national referendum endorsed a new constitution which was widely seen as increasing the already considerable powers of the monarch with the Prince threatening to abdicate if the new constitution was not passed. The Prince retained the power to veto any bill, could dissolve the government at any time and dismiss any minister. The monarchy is extremely popular in Liechtenstein and, rather like the Principality of Monaco, although technically a constitutional monarchy, Liechtenstein is effectively an absolute monarchy in all but name.
Posted by MadMonarchist at 1:10 AM