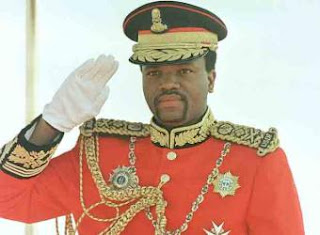 Name: The Kingdom of Swaziland
Reigning Monarch: His Majesty King Mswati III
Reigning Family: Diamini dynasty
Status: The landlocked Kingdom of Swaziland, which is completely surrounded by South Africa and Mozambique, is the last absolute monarchy on the African continent. From 1899 to 1968 Swaziland was a protectorate of the British Empire during which time the country was ruled by Sobhuza II. After his death in 1982 the Great Council of State chose his 14-year-old son Mswati III to succeed him as is the local custom. Although an absolute monarchy, the tradition in Swaziland is for a king and the queen mother to reign together as joint rulers, her title being Indlovukazi or ‘Great She-Elephant’. Today the King is often ridiculed for his lifestyle and for his very numerous wives. This actually is long-established custom that a king take a wife from each Swazi clan. Pro-democracy groups and human-rights groups are constantly criticizing Swaziland and accuse the King of being a dictator. In fact, he is simply ruling as all of his predecessors have done, which is as an absolute monarch. The king appoints all high officials but takes advice from the queen mother and council of ministers. An effort to allow greater democracy was undertaken in the 1990’s but civil strife and infighting quickly brought an end to this and political parties were banned.
Posted by MadMonarchist at 12:39 AM