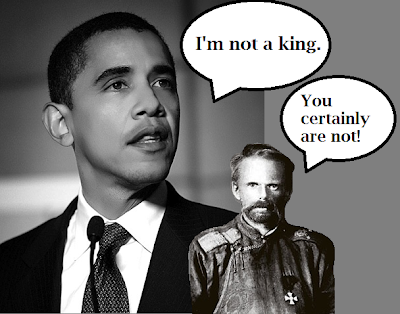 Recently, in an interview with Univision aimed at getting Hispanics to vote for Democrats in the upcoming mid-term elections Obama reminded us all that he is not a king. Frankly Mr. President, I don’t think being mistaken for royalty is a big problem for you. Some very illustrative evidence of this is that interview itself along with another interview done just prior on the radio show of Al Sharpton aimed at getting Blacks to vote for Democrats. Of course, the fact that Obama feels the need to address these two usually very loyal Democrat voting blocs tells you something about the state of his administration but that’s another story. To get back to the point; why does Obama feel it necessary to remind the people that he is not a monarch or lament the fact that he is a mere president rather than a king? Let’s have a look shall we…

The Democrats and probably a great many Republics see Hispanics in the U.S. as single-issue voters. They call it “immigration reform” but the honest truth is that they mean amnesty for illegal aliens. They want no penalties for crossing the border illegally, no one penalized or deported for breaking immigration laws and for all those currently in the country illegally to become full citizens, which would make it easier for them to vote Democrat. That is just the truth, they think that is the only thing Hispanics care about and they assume voting trends will not change. If you think voting trends have nothing to do with it you are kidding yourself. If most Mexican-Americans (the largest immigrant community by far) were voting Republican the Democrats would have the Great Wall of China built across the southern border and Republicans would be calling them “undocumented” immigrants instead of Democrats. When he was running for office, as usual, Obama tried to have it both ways. He said he was against amnesty but favored “comprehensive immigration reform” -which means amnesty. Many Republicans have used the same double-talk. However, half-way through his term Obama has yet to lift a finger on the border/immigration issue and his only explanation to Hispanic voters was that he is not a king and cannot do whatever he wants. In other words, if only he had total dictatorial power he could keep all his promises but he is being thwarted by the limitations on his authority.

One thing this shows the persistent image of royal prestige. Despite the fact that there are few kings left in the world and most of them have little to no power at all the symbol of a king, the very title itself, still seems to connote power and authority. That, in itself, says something about the symbolic importance of monarchy. However, even in the modern sense, Obama is still correct: he is no king. The interviews he has been giving prove that as did his subsequent words in that same interview in which he urged Hispanics to vote for Democrats in order to reward their friends and “punish” their “enemies”. Can anyone imagine the Kings of Spain, Norway, Sweden or the Belgians speaking in such terms? A king is supposed to stand for national unity, the shared history and values of a nation and, though they certainly do not have the power of Louis XIV, be the personification of their countries. Obama, the most prominent president in the world, is doing the exact opposite. Giving separate messages to ethnic and racial communities, dividing the country between certain groups of Americans and calling other Americans the enemy.

Do such feelings exist in monarchies today? Certainly, that is a sad truth but a truth nonetheless. Does the King of the Belgians tend to be more popular in one part of the country than in another? Yes. Are there areas in Spain where King Juan Carlos is more unpopular than in the rest of the country? Yes. As we have recently seen, amongst the subjects of Queen Elizabeth II in Northern Ireland there is one group that is quite fond of her and another group that largely opposes her. These are facts and will tend to be the case in any country that has at least some level of diversity or historical differences. Is the Queen as popular in Quebec as she is in other parts of Canada? Obviously not. However, when the Queen last visited Canada she spoke French as well as English in her official speeches (and she speaks French quite well). Does the King of Spain refer to the more troublesome parts of Spain as ‘the enemy’? Of course he does not because he sees himself, as he must, as the King of all of Spain and for all Spaniards and not just certain parts. In Belgium such an attitude would be unthinkable and for those who do regard their fellow countrymen as enemies the King will not even deal with them.

Obama, by his actions, has inadvertently provided us with a very valuable lesson about the benefits of having a king rather than a president. Modern kings and queens, in the west certainly, hold themselves aloof from politics for this very reason; to avoid partisanship, to take no sides and to represent the nation as a whole rather than one party, faction or school of thought. However, even in the past when kings held actual political power they did not view their subjects in such a way. As has often been discussed here, monarchs view their people as extensions of their family with the king and queen as father and mother of the national family. As such, even when factions disagreed with them or even outright opposed them they were usually not inclined to view them as enemies. Even monarchs like King Charles I of Britain or King Louis XVI who were attacked by their own people did not seek their destruction but preferred to bring them to their senses as easily as possible. Even after his downfall, Tsar Nicholas II still considered the Russian communists as his own people. Politicians, on the other hand, thrive on division, disunity and playing one faction off against another. It is why republics are fundamentally unhealthy and another reason for being a ... Mad Monarchist.
Posted by MadMonarchist at 12:37 AM