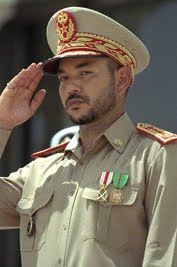 Name: The Kingdom of Morocco
Reigning Monarch: His Majesty King Muhammad VI
Reigning Family: Alaouite dynasty
Status: Morocco gained independence from France in 1956 and is a constitutional monarchy. Theoretically the King holds extensive civil and religious powers including the right to dismiss any government minister, dissolve the parliament, suspend the constitution and rule by decree the last time any of these powers were actually used by the monarch was in 1965. Morocco is a multi-party parliamentary democracy which, in 1998, was even led by a socialist in a coalition government. Recent monarchs and the current king in particular have enacted unprecedented changes in allowing more democracy, greater civil rights and the extension of these rights to women. The King appoints the prime minister but, like other constitutional monarchies, only after the democratic process has taken place and he appoints ministers on the advice of his prime minister. Opposition groups still claim that the King has too much influence in the government though all agree that civil rights have consistently increased in recent years. Religious freedom is allowed though laws remain in place against proselytizing and Muslims may not renounce their faith. The Prime Minister is head of government and the judiciary is independent.
Posted by MadMonarchist at 12:08 AM