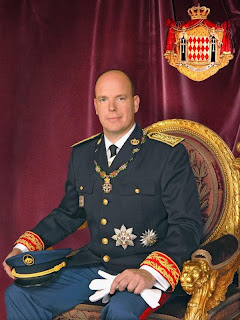 Name: The Principality of Monaco
Reigning Monarch: His Serene Highness Prince Albert II
Reigning Family: House of Grimaldi
Status: The Grimaldi family have ruled Monaco for 700 years, since 1297. In 1612 the ruler of Monaco officially became a prince during the reign of Honore II when Monaco also began its long history as a protectorate of France. Monaco was an absolute monarchy until 1911 when Prince Albert I enacted the first constitution. However, only a few years later the constitution was suspended during World War I. Prince Louis II, son of Albert I, suspended it during World War II and his grandson and successor Prince Rainier III suspended the constitution in 1959 during which some significant changes were made to it and enacted in 1962. The Prince shares legislative power with the National Council and the Minister of State is head of government. However, bills do not require the consent of the Prince to become law but he can stop any bill should he wish. Though the judiciary is independent the justices are appointed by the Prince and serve at his pleasure. Both the National Council and the Prince must agree to pass legislation but the Prince may dissolve the council at any time. Although it is not the image Monaco wishes to display these days the country is, in fact if not in name, effectively still an absolute monarchy.
Posted by MadMonarchist at 12:11 AM