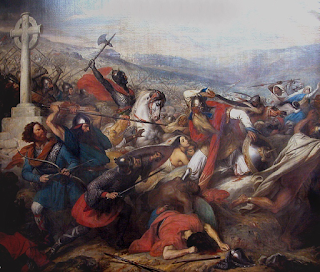 Today in 732 AD the Frankish forces of Charles "the Hammer" Martel defeated an invading Muslim army at the battle of Tours, 12 miles northeast of Poirtiers. It was Charles Martel's grandson who would later go on to become the first Holy Roman Emperor as Charlemagne (Charles the Great). Nowadays no one can agree on how many soldiers were involved on each side, but this was certainly no small accomplishment. The Muslim forces invading France represented the most powerful empire in the western world at that time; the Umayyad Caliphate which, at its height, stretched from India-Pakistan, across Persia, the Middle East, Turkey, North Africa and almost all of Spain. The Muslim commander, Abdul Rahman Al Ghafiqi, was killed in the battle, which was in itself quite a blow to the Islamic forces as he was known in his role as a governor for being fair, upright and magnanimous. Charles Martel was born in what is now Belgium, the son of Duke Pepin II, he had won extensive victories against the Germans before moving to consolidate his hold on France. His actions, and his victory at Tour, paved the way for the creation of the Carolingian Empire, the feudalistic society of the Christendom of the Middle Ages and the Holy Roman Empire which was to be the central political body in Europe for many, many centuries to come.
Posted by MadMonarchist at 12:25 PM