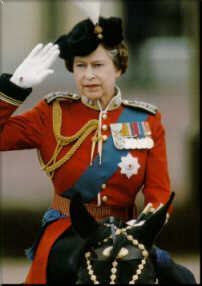 Name: The United Kingdom and Commonwealth Realms
Reigning Monarch: Her Majesty Queen Elizabeth II
Reigning Family: House of Windsor (formerly known as Saxe-Coburg-Gotha)
Status: The monarchy of the United Kingdom of Great Britain and Northern Ireland and the Commonwealth Realms is probably the most well known in the world and certainly no monarch reigns over so vast a territory or array of nations. Nonetheless the traditions shared by these plethora of peoples is essentially the English monarchy when you get down to it. Today the monarch reigns but does not rule. There had long been a tradition of powerful monarchs in England but also an aristocracy and parliament that had a share of power as well. This basic system endured until a coup and a Dutch invasion in 1688 ousted the last Stuart king of the British Isles, replacing the Scottish family with a Dutch and later a German royal line. Part of the bargain in this was that monarchs would henceforth leave government up to the parliament and such has been the case ever since. The monarch is a necessary part of government and retains extensive powers in theory which are, in practice, exercised by the prime ministers who govern in the name of the monarch. Monarchs do not intervene in politics but the Crown is theoretically the basis of all government authority and royal assent is required for all laws.
Posted by MadMonarchist at 12:27 AM