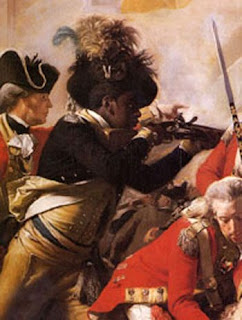 The role of Black Americans in the War for Independence is not much dwelt upon and when it is the coverage usually falls into one of two categories; the glorification of those who supported the revolution (usually implying dishonestly that these were the majority) or simply categorizing them all as victims, powerless slaves who stayed out of a war of Whites as all were their oppressors. As usual, however, this sort of coverage leaves out many of the facts including the fascinating story of the Black American loyalists who certainly understood what was going on, what it was all about and where their interests were best served. They chose to stand for King and Country and probably knew better than most what all of the talk of liberty on the part of wealthy slave-owners in the colonies was really worth. At times you do hear about Black Loyalists, particularly in conjunction with Lord Dunmore but you rarely hear about Black loyalist leaders. Most assume there were none, on either side. However, there was a very famous Black leader among the loyalists and his story is worth telling. He became famous as “Colonel Tye” of the elusive Black Brigade.

His real name was Titus Cornelius and he was born sometime around 1753 into slavery in New Jersey. Not much is known about his origins, only that he was a slave, the child of slaves and so on, who had been sent over from Africa at some point. His owner was a wealthy Quaker named John Corlies of Monmouth County, New Jersey. The Quakers were not very fond of slavery and usually freed them at age 21 after teaching them to read and write. Corlies, however, was no ordinary Quaker and was a notoriously cruel master, more fond of the whip than was usual even for that time. Obviously, Titus Cornelius was less than pleased with the state he found himself in under such circumstances. His chance to remedy that situation came in November of 1775 when Lord John Murray, Fourth Earl of Dunmore and Royal Governor of Virginia decided to try to enlist the slaves of America on the side of the British Crown.

The embattled Lord Dunmore issued a proclamation directed toward all slaves and indentured servants promising them their freedom if they would rise up against their rebellious masters and join his loyalist militia in the fight to restore royal authority across the country. Today most believe that relatively few slaves answered this call, that most were complacent or even content with their lot and took in the war as bystanders. On the contrary, thousands of slaves took the opportunity to run away and at least attempt to join the British army. Obviously, this was not entirely to the benefit of the British cause as it was condemned by American slave owners as a dastardly plot to incite insurrection (which it was) and spark a race war. Many of the planter class were thus pushed into the “patriot” camp. However, Lord Dunmore got his volunteers though it was difficult for all those who wished to reach him but many did and Titus Cornelius was among them. After escaping from Corlies he had posed as a freeman and supported himself by selling his own goods as he moved down the Virginia coast toward the British. Corlies offered a reward for his capture, describing him as “about 21 years old, not very black and about six feet high”.

Lord Dunmore organized some 500 slaves, mostly from Virginia but the New Jersey native Titus among them as well, into the Royal Ethiopian Regiment. There was little to equip them with, they were armed with pikes for the most part and had sashes calling for the emancipation of slaves across their uniforms. Lord Dunmore and his small army met with disaster in December 1775 at Great Bridge but Tye (the name Titus went by in British service) may have missed out on that disaster. The first battle in which we know he took part was the battle of Monmouth in June 1778 where he captured an American captain. By that time Tye had risen to the rank of captain in the Ethiopian Regiment but also came to lead his own unit known as the Black Brigade. This was a group of roughly 25 mixed race (but predominately Black) loyalists who specialized in what would later be known as guerilla warfare. They came to great fame operating in New Jersey and that vicinity where Colonel Tye, as he was now known, was very familiar with the lay of the land and the local families.

Although he was known as Colonel Tye, he never actually held the King’s commission but this title was applied to him by his men and later others as a mark of respect and a recognition of his leadership abilities. The British paid Colonel Tye and his raiders to wreak havoc on the region, mostly around Monmouth County. Like Colonel Tye, many of his men were slaves who had escaped from this area and they often took the opportunity to exact revenge on their former masters and their families, sometimes gruesomely but few today would say without justification. Colonel Tye became feared and loathed by the American revolutionaries but, being so few and knowing the terrain so well they were extremely hard to catch. Particularly in the summer of 1779 Colonel Tye and his Black Brigade devastated the region, plundering farms and plantations, capturing rebel supplies, emancipating slaves and striking terror into the hearts of the disloyal populace. By winter they joined forces with the Queen’s Rangers (a rather elite unit also made up of American loyalists) and aided in the British defense of New York.

Colonel Tye and his men fought on as they had before into 1780 becoming widely known for tactics most would describe as ruthless, partly because they were known for assassinating several leading American “patriots” such as Joseph Murray (who himself was known for executing loyalists). In fact it was while pursuing American Captain Joshua Huddy that Colonel Tye was wounded in the wrist by a musket ball. Tetanus and gangrene later set in and some time later Colonel Tye died. Although not much remembered today, Colonel Tye was a master of irregular warfare and his raids were a great help to the British war effort. As little known as he is now he was positively infamous in his own time among his enemies. Even among the British his methods made him something of an unsavory character to some but, rest assured, it was not his tactics that cause him to be ignored by most history books today but simply the side for which he fought; King, country and his case -emancipation.
Posted by MadMonarchist at 12:31 AM