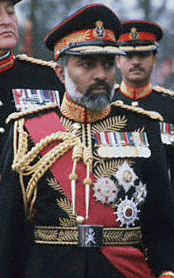 Name: The Sultanate of Oman
Reigning Monarch: His Majesty Sultan Quaboos bin Said Al Said
Reigning Family: Abu Sa’id dynasty
Status: Once partly held by the Portuguese and later part of the British sphere of influence, Oman was once a powerful state that dominated the southern Arabian peninsula and parts of eastern Africa. In recent years rebellions, internal strife and communist subversion have been problematic. Oman is an Islamic absolute monarchy with key decisions made by the Sultan and his appointed cabinet. In the 1990’s an electoral advisory council was established though universal suffrage was only established in 2003. Today women can vote and hold public office. Political parties are banned and all elected officials have only advisory and consultative powers with the Sultan holding final authority over the legislative and judicial process. Rather than being strictly hereditary, new monarchs are chosen by the agreement of the royal family after the death of the previous sultan.
Posted by MadMonarchist at 12:45 AM