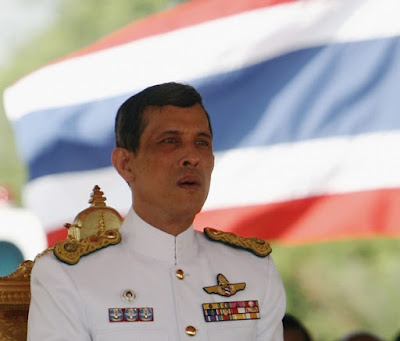 Name: The Kingdom of Thailand
Reigning Monarch: His Majesty King Maha Vajiralongkorn (Rama X)
Reigning Family: Chakri dynasty
Status: Thailand (formerly Siam) is a constitutional monarchy but one in which the king is widely revered and widely believed to hold a semi-divine status. Thais view their royal family with great respect for modernizing the country at a careful pace and for allowing Thailand to remain the only country in southeast Asia never colonized by a foreign power. Until 1932 Thailand was an absolute monarchy. A coup of civil and military elites took power at that time, though the King remained, and a succession of military governments followed. However, whereas other nations might have descended into outright civil war in similar circumstances Thai reverence for their beloved monarch proved decisive. Even though the King lacks actual political power, his widespread popularity and intense prestige has allowed him to intervene in moments of crisis to stop struggles for power from escalating. From 1973 onwards Thailand has been a basically stable constitutional monarchy though there have been periods of military intervention. Thailand is known for having strict Lèse majesté laws. However, the Thai monarch is so beloved and revered, if anyone were to speak disrespectfully of him in Thailand the authorities would be the least of their worries.
Posted by MadMonarchist at 12:29 AM