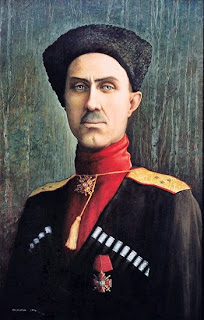 One of the most active and dedicated leaders of the White Russian movement after World War I was Baron Pyotr Nikolayevich Wrangel. Because of the color of his long, Cossack coat and the dread with which the Bolsheviks viewed him he became known among the Reds as the “Black Baron”. Like many leaders of the Imperial Russian Army he was actually descended from the Baltic German nobility and was born in Lithuania on August 15, 1878. That being said, his family ties in the region were very old and the Wrangel house had served Russia for a long time. As a young man Pyotr went to school to study engineering but not long after joined the Imperial Russian Army, going into the cavalry and seeing service in the disastrous Russo-Japanese War. Having obtained a commission in 1902 he went on to the General Staff Academy and graduated as a cavalry officer in 1910.

During World War I the Baron made a name for himself by his skill and courage, becoming on of the first soldiers to earn the fourth grade St George Cross (he would go on to earn a number of decorations). Promoted to colonel in 1914, the following year he was posted to the Trans-Baikal Cossack army on the southwest front. Over 1915 and 1916 he earned further promotion for his gallant service against the Austrians in Galicia and in other areas. At the end of 1917, while at his dacha near Yalta, he was arrested by the Bolsheviks as a ‘class enemy’. However, he was released and dodged the Reds in the Crimea until the arrival of the Germans when he was able to escape to the Ukraine where he joined with the local monarchists there, backed by the Germans, gathered around the Hetman Pavlo Skoropadsky. However, seeing that they were sustained only by German support he left to join the White Russian Volunteer Army in 1918.

Again he earned promotion, first major and then lieutenant general, commanding the cavalry division of the Volunteer Army and then being given command of the Caucasus Army. In the summer of 1919 he captured Volgograd and was becoming quite feared among the ranks of the Red Army and a hero to the Whites. His forces were noted for their discipline and good order and the Baron for his administrative as well as military skill. At the end of the year Baron Wrangel was given command of the entire Volunteer Army. However, unfortunately, as was all too common, Baron Wrangel had to leave for a short time due to problems with his fellow White Russian General Anton Denikin. Yet, by the spring of 1920 he was back and elected commander of the White Russian forces in the Crimea. He effectively took political control of the area, instituted a number of reforms and, despite his monarchist reputation, granted recognition to other break-away republics such as the Ukraine, Georgia and so on, that were also opposed to the Communists.

Probably no other White Russian leader demonstrated as much political as well as military skill. Nonetheless, the odds were against Wrangel and his forces were eventually overwhelmed and he and his people were forced to evacuate by sea in the fall of 1920. He eventually settled in Yugoslavia (then the Kingdom of the Serbs, Croats and Slovenes) and became the leader of the Russian exile community. In 1924 he established the Russian All-Military Union as a vehicle to maintain the unity and traditions of the White Russian movement while scattered abroad. His leadership was recognized by the Grand Duke Nicholas, his former commander in World War I. In 1927 Wrangel and his family moved to Belgium where he took a job as a civil engineer in Brussels. The following year the Baron died on April 25, presumably poisoned by his butler’s brother who was a Soviet agent. He was buried in the Holy Trinity Russian Orthodox Church in Belgrade.
Posted by MadMonarchist at 12:46 AM