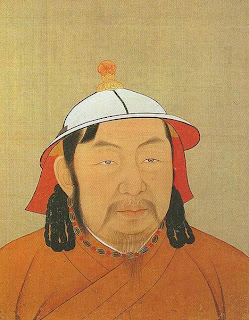 Ayurbarwada Khan, as known as Emperor Renzong of the Yuan Dynasty, was the eighth Great Khan of the Mongol Empire. In stark contrast to his predecessor and brother, Khaishan Khan, who ruled like in traditional Mongol fashion, as a nomadic chieftain of the steppe, Ayurbarwada Khan employed a more distinctly Chinese style in the administration of his vast realm. Ayurbarwada was born on April 9, 1285 to Darmabala and Dagi of the Khunggirat and was a great-grandson of the famous Kublai Khan. His destiny was shaped as a teenage boy when he was tutored by the Confucian scholar Li Meng. In 1305 the Dowager Empress Bulugan, wife of his uncle Temur Khan, removed him from court and sent him to Honan as the Prince of Huai-ning as part of her desire to remove all of the Khunggirat brothers of Khaishan Khan. Her aim was to have the governor of Ningxia, the Muslim Ananda, one of her favorites, take power.

However, Harghasun, the Yuan chancellor, recalled Ayurbarwada to Dadu where they plotted the overthrow of the Dowager Empress and Ananda who captured and imprisoned. He stepped aside for his brother Khaishan Khan to become Emperor and was in turn named crown prince and heir to the throne in June of 1307. The two brothers agreed that their descendents would rule the empire in turns. However, Ayurbarwada opposed the leadership style of his brother and some of his supporters abandoned him when he did not take the throne for himself. However, Ayurbarwada was a devout Confucian and said nothing of his disagreements with Khaishan Khan until his death in 1311 when Ayurbarwada Khan ascended the Yuan dynasty throne. Somewhat unusually for the Mongol Empire the transition from one Great Khan to another was largely peaceful and uncontested.

As Emperor, Ayurbarwada Khan was known for his Chinese sympathies. Being the product of a Chinese style education he loved painting and calligraphy and made a conscious effort to adopt Chinese methods of administration rather than carrying on with the Mongolian style of his predecessors. He got rid of the ministers left over from the reign of his brothers and replaced them with pro-Confucian ministers. In what was seen as the ultimate act of his reversal of policy to a more Chinese style he restored the civil service examination system for the first time since the Mongol conquest of China, at least for lower level administrators. Chinese scholars surrounded him and this naturally began to cause resentment amongst the Mongol princes at court. He met with more opposition when he encouraged Mongol nobles and commanders to learn from the principles of Confucius, implying, as they saw it, a form of Chinese superiority.

Opposition tended to form around the mother of the Great Khan, Empress Dowager Targi whose clique at court detested the pro-Chinese policies of the Emperor. Still, Ayurbarwada Khan went on reforming the judicial system, revising and codifying the legal system put in place by his ancestors and translating Confucian and other Chinese literature into Mongolian. In foreign policy there were no great successes but no major failures either. Attempts to assert influence over khanates in central Asia and southern Russia but to no effect. Authority was reestablished over what is now Xinjiang. Ayurbarwada Khan died on March 1, 1320, leaving the throne to his son and heir Crown Prince Shidebala in what was the only peaceful succession of a son in the history of the Yuan dynasty. His reign had been mostly stable and successful but his reforms left simmering resentment that would boil over in the years after his death. After his death he was given the temple name ’Emperor Renzong’ or ’Benevolent Ancestor’.
Posted by MadMonarchist at 12:33 AM