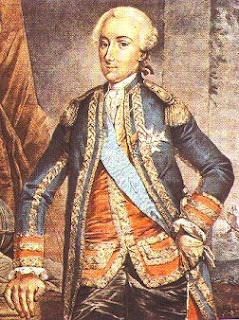 One monarchist even the most staunch American republicans should honor is Jean Baptiste Charles Henri Hector, comte d’Estaing. He was born on November 24, 1729 in Auvergne to the Marquis de Saillant, then a lieutenant general in the French army, and his wife Marie-Henriette Colbert de Maulevrier. Although he would later gain fame on the high seas the young Charles Hector began his military career in the army, obtaining a place as colonel in the French infantry. He showed great promise and in 1757 was promoted to brigadier general and was dispatched to the East Indies with the famous comte de Lally (a French general who was the son of an Irish Jacobite). He served in India against the British at Madras where he was taken prisoner by the British after the siege that lifted that city from French control but he was later paroled. Prior to being exchanged he entered the service of the French East Indian Company and got his first taste of naval service, destroying British factories and property in Sumatra and the Persian Gulf in command of two company ships.

However, the future comte d’Estaing was again captured by the British while on his way back to France in 1760. After doing some time in prison at Portsmouth he was released and in 1763 was promoted in his service to the French navy and by 1777 had obtained the rank of vice-admiral. Of course, by this time the American War for Independence was raging in the British North American colonies and France saw an opportunity to exact revenge on their old enemies for past defeats. In 1778 d’Estaing was sent with 12 ships-of-the-line and 14 frigates from Toulon to American waters to aid the rebels there against the British. By the middle of July he was on station off New York harbor, bottling up the British forces of the Howe brothers but fearing his larger vessels would run aground he refrained from pursuing them into shallower waters to give battle.

The comte d’Estaing later participated in planning a combined Franco-American attack on Newport, Rhode Island but when he put to sea to engage the fleet of Admiral Howe a sudden storm scattered both armadas and the French had to return to Boston for repairs. However, the threat of the attack did succeed in scaring the British to scuttling some of their precious warships that were in Newport for fear that they would be taken. Once his repairs were complete the admiral sailed to the West Indies in early November and succeeded in capturing the British islands of St Vincent and Grenada. The following year, on July 6, 1779 the comte d’Estaing defeated the British under Admiral Byron at Grenada before going on to Savannah, Georgia where he joined in an American effort to take the port city which ended in utter failure. On that low note the count sailed back to France in 1780 and saw no further action in the War for American Independence.

With a fairly mixed record much blame was attached to the admiral at court for failing to win more decisive victories. Some of his own officers joined in the chorus of criticism against him and d’Estaing was fairly unpopular at Versailles as a result. Still, as an experienced commander with some victories under his belt he was chosen to command a joint Franco-Spanish fleet that was to take on the British but the war ended before they could see action. It is not often remembered that, while the U.S. succeeded in winning its independence, it did so by a separate treaty, abandoning their former allies and the British ultimately won the wider war against France and Spain. The comte d’Estaing must have made a favorable impression in Madrid for he was awarded the rank of a Grandee of Spain, nonetheless he left the naval service and went into politics in France being elected to the Assembly of Notables in 1787.

Given how he viewed at court it is, perhaps, not surprising that when the French Revolution began to erupt the comte d’Estaing favored some of the initial reforms during the transition to constitutional monarchy. Some leading revolutionaries thought enough of him to put him in command of the National Guard at Versailles and in 1789 he was restored to the rank of admiral by the Assembly. However, despite his problems with the court in the past and his support of early reforms d’Estaing would not forsake his loyalty to the King and Queen. He was outraged by their treatment and when Queen Marie Antoinette went on trial in 1793 he committed political suicide by testifying on her behalf.

With that the comte d’Estaing immediately became very unpopular with the revolutionaries who began plotting his destruction. They found some letters the admiral and the Queen had exchanged which they produced as proof that the count was an enemy of the revolution. The veteran warrior was hauled into court as a reactionary and enemy of the people and quickly condemned to death. On April 28, 1794 Jean Baptiste comte d’Estaing was sent to the guillotine and beheaded. Before his death the old admiral famously said, “After my head falls off, send it to the British, they will pay a good deal for it!”
Posted by MadMonarchist at 12:14 AM