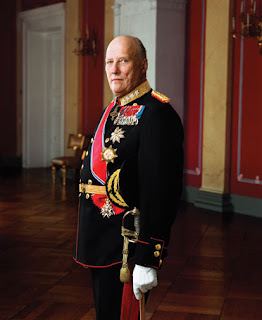 Name: The Kingdom of Norway
Reigning Monarch: His Majesty King Harald V
Reigning Family: House of Glücksburg
Status: Although the current form of the Kingdom of Norway came about in 1905 after the dissolution of the union with Sweden, the royal traditions of Norway are thousands of years old. Once a land of numerous small Norse kingdoms, Norway was united but spent much of the last few centuries united with either Sweden or Denmark. Norway is a constitutional monarchy with the monarch holding considerable powers on paper. Effectively, however, these powers are exercised by the Council of State in the name of the monarch. The reserve powers of the Crown are maintained as a security failsafe but the monarch today is effectively ceremonial. The monarch ratifies laws, dispatches and receives envoys and serves as a symbol of national unity. The King has sovereign immunity and the Council of State is responsible for his actions with other members of the royal family answerable only to the King. The King has the power to veto bills to prevent them becoming law but his veto can be overridden and in any event no modern King of Norway has ever tried to veto a bill. As with most European monarchies his powers are exercised exclusively by members of the sitting government.
Posted by MadMonarchist at 12:10 AM