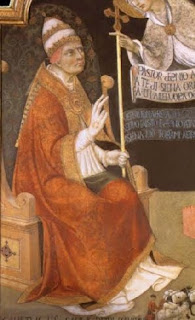 Pope Callixtus III was the first member of the now notorious Borgia family of Spain to come to the throne of St Peter. Born in 1378 in Valencia he was first a lawyer and then later a diplomat for the King of Aragon. After entering the Church he was raised to the rank of cardinal for negotiating a reconciliation between King Alfonso V of Aragon and Pope Eugene IV. In 1455 the aging Cardinal Borgia was elected to the See of Peter as a compromise candidate, no one expecting him to live very long or do very much to rock the boat as they say. As usual, popular opinion was wrong. Taking the name Callixtus III he proved to be a very active and zealous pontiff despite his age and the one overriding goal of his reign was the dream of retaking the city of Constantinople for Christendom. He proved himself willing to sacrifice as much as necessary, to bear any burden to further the cause of this hoped for crusade.

Known as a pious man and an idealistic cleric he also gained a reputation for austerity born out of his drive to retake the capital of the Eastern Roman Empire. The extensive building programs under way in Rome were cancelled and the money funneled toward the crusade. Artists were dismissed as unnecessary at the moment, the papal treasury was emptied and Callixtus even stripped his own Apostolic Palace, selling his silver and gold to raise money for Constantinople. He said, the Pope could eat off the same plates as the peasants used as easily as silver or gold. However, despite his sacrifices and urgent calls for action on the part of the crowned heads of Europe most had no interest in renewing the fight against the formidable Turks. Some zealous souls did answer and waged an on-going war in the Balkans and the Aegean Sea but the powerful Sultan was hardly bothered by these and Constantinople was never in danger of falling.

The taxes, penny-pinching, and badgering for armies to assemble from the Pope meant that Callixtus III was not too popular in the capitals of Europe. Sadly, he was not terribly appreciated in his own either. The Romans, not too fond of foreigners to begin with since the whole Avignon affair, were unhappy with the appearance of so many new Spanish officials and two new Spanish Borgia cardinals as well as being rather disgruntled about the Pope halting the building projects that cost a great deal but had provided employment to many Romans. The noble aspirations of the Pope did not get him very far with the man on the street though his actual accomplishments include some very good but often overlooked things. For example, he officially rescinded the declaration of heresy leveled against (future saint) Joan of Arc, correcting one of the grossest miscarriages of justice of the Middle Ages. The crusade, such as it was, did have at least one notable success in lifting the Muslim siege of Belgrade for which the Pope declared August 6 the Feast of the Transfiguration. He also entrusted the military Order of Christ to Prince Henry the Navigator of Portugal, the country on the cutting edge of global exploration.

It was the misfortune of Callixtus III that virtually every power in Europe was busy fighting their own enemies (England and France, Germany and Hungary, Aragon and Genoa etc) to join forces in retaking Constantinople. Today he is also rather tainted, unfairly, by his family name and accused of the usual range of corruption and nepotism. However, all of this is quite unfair. He never attempted to enrich himself as is proven by the large sum of money left in the treasury at the end of his life and compared to most others his elevation of two nephews as cardinals is a poor basis for a charge of nepotism. He earnestly tried to end the petty squabbling across Europe and unite the Christian princes for the common defense and he should be given some credit for that. It is, perhaps, fitting that he died on August 6, 1458, the very day he previously ordered celebrated in honor of the victory at Belgrade.
Posted by MadMonarchist at 12:16 AM