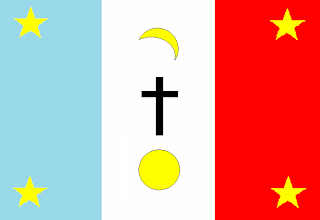 In the deserts of the Mexican state of Sonora reside the Yaqui Indians. A very unique group among Native Americans they are known for being very tall, being very fierce warriors and for their love of flowers. This is related to their deeply held devotion to their colorful religion; a combination of their own native beliefs and Catholicism. They were never conquered by the Spanish but were converted by Jesuit missionaries, bringing them into the Spanish imperial fold. They had a close relationship with the Jesuits and when the colonial government ordered them out of Sonora the Yaquis rebelled. Nonetheless, despite their problems with Spain, their relationship with the republican government that replaced them was far worse.

The Yaqui Indians had often clashed with the Mexican government from the very start. Even the liberal governments that spoke so grandly about freedom, democracy and constitutional rule were often the worst of all in their treatment of the Yaquis. The liberal federalist General Jose Urrea, for example, sold Yaquis into slavery, confiscated their land and sold it to Texan speculators. When the Yaquis resisted General Urrea led a brutal punitive expedition into Yaqui territory in November of 1842. The following year he enforced new laws which forced the Yaquis to live where the government ordered them to, send their children to government schools, surrender all of their weapons and forbidding them to leave their designated residence without passports. Outsiders were also forbidden to enter Yaqui territory without government permission for fear such individuals might incite rebellion.

Despite these measures, over the next decade rebellions and repression continued in a seemingly endless cycle. Even after the State of Sonora accepted the “reform” constitution of Benito Juarez the Yaquis were still treated little better than a servant class with few rights and no means of self defense. Rebellions and punitive expeditions continued in the years right up to the French intervention with the Juarez government, despite their high-sounding ideals, presiding over just as much brutality against the Yaquis as the other dictatorial regimes before him. When the French intervention began in 1864, Mexico City was quickly captured and as the French advanced on the port of Mazatlan President Juarez fled north to Chihuahua, declared Sonora to be in a state of siege and ordered the Governor of Sonora, Pesqueira to prepare for a French attack.

In March the following year four warships of the Imperial French Navy appeared in the port of Guaymas and on board was former Sonora warlord Manuel Maria Gandara whose family had led elements of the Yaqui people against the republican government in the past. He had been exiled by the federal authorities but once back on Mexican soil went to the Yaqui people and called on them to embrace the French and the new monarchy of Emperor Maximilian that was being established. By and large, the Yaquis did so and it is important to remember why. The Yaquis had been mistreated by virtually every republican administration they had dealt with so anything, the French or Emperor Maximilian, must have seemed like a chance for something better at the very least. It is also a fact that, from the time of his arrival, because of these circumstances, Indians across Mexico had been among the most enthusiastic supporters of Emperor Maximilian. This is significant when one remembers that Benito Juarez was a full-blooded Zapotec Indian himself and yet most Indians still preferred to put their trust in Maximilian because of how they had been treated by the republican government, Juarez included.

Rising up again against the republican administration in Sonora, and on May 22, 1865 defeated the forces of Governor Pesqueira outside of Guaymas. On July 13 French Imperial forces launched a successful attack against Pesqueira in Ures with a coalition force of many Indian and other local groups including Opata, Mayo, Pima and Yaqui leaders. However, in September the republicans launched a devastating counter-attack in Sonora led by General Morales starting with a critical victory at Guadalupe. By the end of October republican forces had devastated much of the region, not only in terms of the warriors killed and the women and children herded into captivity but also by the theft and destruction of Yaqui livestock to rob them of their mobility and starve them into submission -a common republican tactic against the Yaquis. On November 22, 1865 some 1,500 Yaqui fighters were forced to surrender to General Morales at El Medano and accept republican rule again. Sadly, after their defeat and surrender the Yaquis would suffer the greatest atrocities of their history in the years that followed.
Posted by MadMonarchist at 12:32 AM