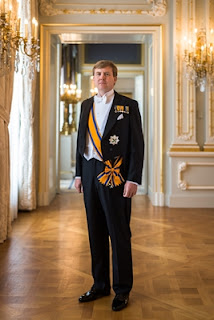 Name: The Kingdom of the Netherlands
Reigning Monarch: His Majesty King Willem-Alexander
Reigning Family: House of Orange-Nassau
Status: Upon gaining independence the Netherlands was a princely republic under the House of Orange though a pro-monarchy faction (or Orange Party) existed from early on. The current Kingdom was established after the defeat of France in the Napoleonic Wars in 1815. Originally the Dutch monarchs held considerable and extensive powers, being effectively an absolute monarchy with the States-General having only an advisory role. When revolutions broke out in other countries King Willem II tried to prevent such an occurrence in the Netherlands by willingly giving up much of his power and making the country a constitutional monarchy. More liberal changes came later and during the reign of Willem III there were many clashes between the monarchy and the elected government. His death and the regency in place during the minority of Queen Wilhelmina was used as a way for the political class to take almost all power from the monarch. Queen Wilhelmina tried to reverse this, and was partially successful due to her own strength of personality, but the overall authority of the monarchy has only declined. The monarch signs bills into law but by convention no longer proposes legislation or takes any role in the legislative process. The government is responsible for all laws and advice.
Posted by MadMonarchist at 12:19 AM