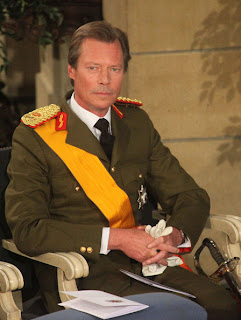 Name: The Grand Duchy of Luxembourg
Reigning Monarch: His Royal Highness Grand Duke Henri
Reigning Family: House of Luxembourg-Nassau
Status: Although Luxembourg has a very long history the current monarchy and grand ducal line date from 1890 when King Willem III of the Netherlands died with no male heir at which time Luxembourg (Salic law being in effect) separated from the Netherlands and the throne passed to Duke Adolf of Nassau. Luxembourg is a constitutional monarchy and according to the constitution, “The Grand Duke is the head of state, symbol of its unity and guarantor of national independence. He exercises executive power in accordance with the Constitution and the laws of the country”. The monarch had an active role in government but that began to change with Grand Duchess Marie-Adélaïde whose involvement made her the subject of many unfair criticisms and finally forced her to abdicate and retire to a convent. A new constitution was adopted and the public affirmed their wish to remain a monarchy. Since then monarchs have remained outside of politics though the assent of the Grand Duke (or Duchess) was still required to make bills law. However, in 2008 Grand Duke Henri announced that his conscience would not allow him to sign a bill into law legalizing euthanasia. At that point the constitution was amended so as to remove the Grand Duke completely from the legislative process.
Posted by MadMonarchist at 12:28 AM