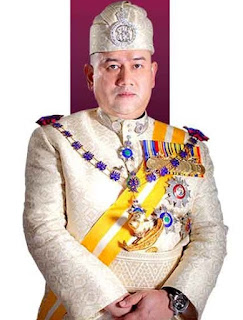 Name: The Kingdom of Malaysia
Reigning Monarch: His Majesty Sultan Muhammad V of Kelantan, Yang di-Pertuan Agong of Malaysia
Reigning Family: electoral office
Status: Malaysia is a federal constitutional monarchy which consists of 13 states and 3 federal territories. The King or Agong (head) is elected from among the sultans of the 9 Malay states known as the Majlis Raja-Raja or Conference of Rulers and the governors of the four other states. Only the nine sultans may vote and only one of their own can be chosen for the position of head of state. At the same meeting a deputy king is also chosen. Although the office is an electoral one, in effect it works on a system of rotation with each sultan being elected in turn. The term for each king is five years. The King is a constitutional monarch who acts in most areas on the advice of his ministers though he does have some discretionary powers. Formerly part of the British Empire the elected government follows the Westminster parliamentary model to a large extent. Despite being legally limited in their powers the state monarchs have considerable influence in the religious and political spheres. Malaysia is a member of the British Commonwealth and retains many British imperial traditions such as the Trooping of the Colour. Soldiers from Malaysia have also taken their turn standing guard at Buckingham Palace in London.
Posted by MadMonarchist at 12:09 AM