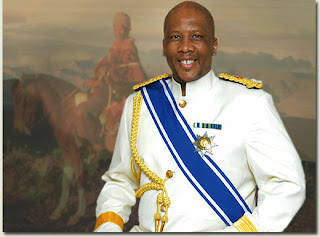 Name: The Kingdom of Lesotho
Reigning Monarch: His Majesty King Letsie III
Reigning Family: House of Seeiso
Status: The country of Lesotho was founded as a result of the many African tribes driven off their lands by the victorious campaigns of King Shaka of the Zulus. A group finding refuge on the Qiloane plateau and led by their chief Moshoeshoe became what is now Lesotho. A British protectorate for over a hundred years at times there was a danger of Lesotho being absorbed by South Africa which totally surrounds it. However, in 1966 Lesotho became a completely independent kingdom and a constitutional monarchy with their paramount chief becoming King Moshoeshoe II. Originally the monarch had considerable powers but despite being widely popular amongst the people the King was opposed by many elites and had a very troubled reign. In 1990 the King was deposed again and replaced by his son Letsie III. The first elections were held in 1993 but by 1995 Moeshoeshoe II was back on the throne only to die in a car crash less than a year later. King Letsie III has determined to be a strictly constitutional monarch and has refrained from intervening in politics even when the public have demanded it.
Posted by MadMonarchist at 12:04 AM