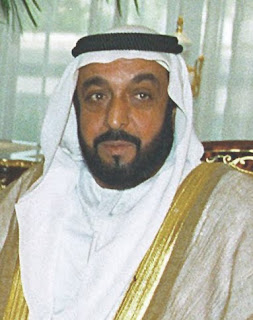 Name: The United Arab Emirates
Reigning Monarch: His Highness Sheikh Khalifa bin Zayed bin Sultan Al Nahyan
Reigning Family: House of Al-Falasi
Status: The UAE consists of the Persian Gulf monarchies of Abu Dhabi, Ajman, Fujairah, Sharjah, Dubai Umm al-Quwain and Ras al-Khaimah. Abu Dhabi is the capital and second largest city. The area was formerly known as the Trucial States or Trucial Oman they were formerly a protectorate of the British Empire. The UAE is a constitutional monarchy in which the presidency is held by the Emir of Abu Dhabi and the post of prime minister by the Emir of Dubai. All of the individual emirates are absolute monarchies and all powers not specifically ceded to the national government are retained by the member states. Although in the past the area was relatively poor, subsisting by a combination of fishing and piracy, the discovery of oil and natural gas resources led to an immense leap in the standard of living and immense wealth for the ruling families of the emirates. Islam is the official state religion but there is tolerance of other religions and Islamic courts handle cases only dealing with family and religious issues pertaining to their own adherents.
Posted by MadMonarchist at 12:14 AM