Mad Rant: Where Have All the Cowboys Gone? 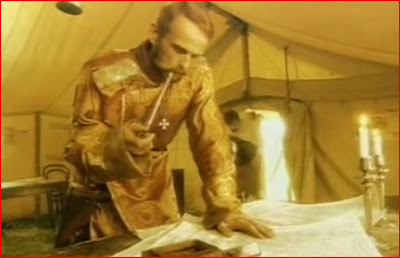 No, not just a song, but a legitimate question. Where have all the cowboys gone? Not my fellow cattlemen of course, but the good guy heroes of our culture? Where is Gary Cooper, wearing a white hat, defending the innocent and taking down the town bully? Where is John Wayne and the US Cavalry riding to the rescue of embattled settlers? For a more Old World example, where is the lone knight defending the honor of his beloved lady? Where is the God fearing hero with the strong arm and loyal heart ready to charge into the barbarian hordes for his king and country? We are told over and over again that the modern masses are too sophisticated for such figures, who (we are reassured) never really existed anyway. However, it seems to me, particularly in that dominant media of modern pop culture -cinema- the public still loves its traditional, good guy heroes.

For example, “Braveheart” was a hugely successful film and I will submit that, to a large extent, this was because it was an historical epic with really bad history. William Wallace was a good guy, about as close to a traditional hero as modern film seems capable of producing, struggling against King Edward I who was portrayed, in a simplistic and historically inaccurate way, as the blackest of Hollywood villains. And it worked, it was stirring, it was moving and people loved it. Contrast this with other historical films like “Kingdom of Heaven” or “The Alamo” (the latest version) in which traditional heroes are cut down and everyone on every side, be they ‘good guys’ or ‘bad guys’ are portrayed as having positive and negative aspects and so on. Unlike “Braveheart” both of these movies were major box office bombs. Surprisingly, people want heroes and villains in movies and they do not like to see traditional heroes denigrated no matter the justification.

Would a movie about George Washington that was exactly accurate really be a big success? Do Americans want to see their revered founder marrying money, driving slaves, cussing out his own soldiers after their constant defeats, blaming his men for lack of success or whining endlessly about how unappreciated he is? Of course not! The fact that it is all perfectly true makes no difference, that is not what people want to hear even if they know it to be true. Now, if a movie did this, it still could work (at least in some countries) if this was contrasted to a heroic portrayal of King George III, but we all know that is not going to happen. A movie might be made that tore down George Washington but it would invariably tear down King George as well. It would not be inspiring, it would not motivate anyone to see it and would basically leave those who did feeling rather down. Another example covered here was the St Joan of Arc film “The Messenger” which certainly did not make the English look good but made the French look just as bad and portrayed Joan as a lunatic. Audiences want someone to root for and more often than not these days they are not getting it.

I tend to be of the opinion, whether with movies or some other such media, that history should be taught with a point behind it. Naturally, I do not mean to change or revise the facts of what have happened, but in the telling of any story we always emphasize some things over others. However, there should be a moral to a story and some benefit to the telling of it. Once upon a time history was viewed as learning from the past so as to avoid mistakes in the future. A noble enough goal. However, if we are to follow the current trend of ‘everyone was bad and no one was better than anyone else’ I have to ask what lesson can we possibly learn from that? Call it what you like, moral relativism seeping into pop culture or simply bad filmmaking but it makes for some pretty mad “entertainment” and a very … Mad Monarchist.
Posted by MadMonarchist at 12:48 AM