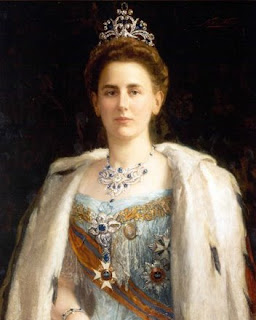 The longest reigning Dutch monarch since the founding of the Kingdom of the Netherlands was the formidable Queen Wilhelmina. She reigned for 58 years and saw her people and her country through the tense neutrality of World War I, invasion and occupation during World War II and the collapse of the Dutch empire in the years that followed. For someone who inherited the throne at a relatively young age, from start to finish Queen Wilhelmina was a woman who could be instantly recognized as *the* person in charge. Given the constitutional confines of the Dutch monarchy it would be going too far to call her 'autocratic' but she was certainly a much more "hands-on" monarch than most modern Europeans would expect today.

Wilhelmina Helena Pauline Maria of Orange was born on August 31, 1880 to King Willem III of the Netherlands and Queen Emma of Waldeck und Pyrmont. Her father was in his 60's when he had her and so she did not have long to wait before inheriting the throne in 1890 with her mother acting as regent. In 1901 Queen Wilhelmina married Duke Hendrik of Mecklenburg-Schwerin but the marriage was not an extremely successful one and it was 1909 before the couple had their first and only child; the future Queen Juliana. From early on in her reign the Queen proved to be quite an independent force in foreign affairs. She harbored harsh feelings against the British because of the Boer War as she naturally sympathized with the Dutch farmers. The world was surprised and impressed when the 20-year-old Dutch Queen sent a warship of the Royal Netherlands Navy to rescue President Paul Kruger of the Transvaal.

World War I did nothing to improve the image of the British in the eyes of the Queen though she was wary of Germany as well. When Kaiser Wilhelm II boasted that his guard-troops were 7ft tall Queen Wilhelmina reminded him that if the Dutch opened their dikes the water would be 10ft deep. However, the Germans decided against invading the Netherlands and respected Dutch neutrality, though the border was flooded with Belgian refugees. Yet, the Dutch suffered considerably due to the blockade of the entire North Sea by the British Royal Navy. Many Dutch people, from the Queen on down, felt unjustly persecuted by the blockade which only forced them to trade almost exclusively with Germany and often increased feelings of solidarity with the Germans rather than animosity. When World War I ended and Kaiser Wilhelm II abdicated and fled into exile in the Netherlands Queen Wilhelmina allowed him to take refuge. When the Allies demanded that she hand him over for prosecution she staunchly refused and when it was demanded again with hints of a threat the Dutch Queen essentially dared them to "try it!"

One of the remarkable things about the Queen's granting of asylum to the Kaiser was the rise of revolutionary communism across Europe following the horrific Bolshevik Revolution in Russia. It was these feelings and fears which caused King George V of Britain to refuse his cousin Czar Nicholas II and his family sanctuary in Britain; which ultimately spelled the doom of the Romanov family. Queen Wilhelmina, to her credit, did not give in to the same mentality even though the Kaiser was a far from popular person in 1918 and there were threats of communist revolution in Holland itself. However, Queen Wilhelmina showed iron resolve and displayed the total trust she had in her people and the people responded with the utmost respect and loyalty. Simply by her powerful, regal, personality she stopped a revolution in the Netherlands before it started. In the inter-war years the Queen played a major role in government and the country went through large land-reclamation projects and massive industrialization. However, it also saw tragedy for the Queen with the death of her mother and her husband.

World War II brought even more suffering. Despite pledges to respect Dutch neutrality as in the last war the Germans launched a surprise attack on Holland preceded by a brutal bombing campaign and all the rigors of occupation. The outmatched Dutch army fought for four days before being forced to surrender. Queen Wilhelmina was rescued by a British warship and she relocated to Britain where her government-in-exile helped coordinate resistance forces, military forces working alongside the Allies as well as the war in Asia which came with the Japanese invasion of the Dutch East Indies. Queen Wilhelmina was the symbol of opposition for the Dutch people and her radio messages gave them courage to endure and resist the long years of the German occupation.

After Germany and Japan were defeated the Queen faced another crisis when rebellion broke out in the Dutch East Indies (Indonesia). Queen Wilhelmina was determined to resist the revolutionaries to the utmost and was staunch in her defense of the Dutch empire. However, the Netherlands was hardly in a position to carry out a long struggle against guerilla forces and with little to no foreign support the government was forced to accept the loss of Indonesia. This may have been the last straw for the long-serving monarch and in 1948 Queen Wilhelmina abdicated in favor of her daughter Juliana and retired to Het Loo Palace. She spent a mostly quiet retirement, only making occasional appearances to boost public moral in times of crisis. She died in 1962 after a near lifetime of service to her country and seeing her people and her country through their darkest periods of crisis.
Posted by MadMonarchist at 10:24 PM