In Memory of Emperador Maximiliano 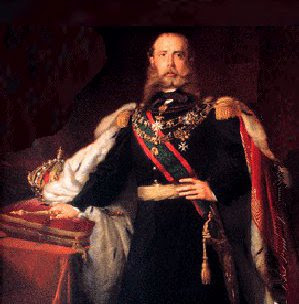 It was on this day in 1867 that HIM Emperor Maximilian of Mexico was executed by firing squad alongside his loyal generals Miguel Miramon and Tomas Mejia on the Hill of the Bells in Queretaro, Mexico. It was the end of what had been a grand adventure and romantic dream to bring enlightened monarchy to the chaotic country south of the Rio Grande and to forge a Catholic Latin Empire in the New World. Archduke Maximilian von Hapsburg had been plucked from his castle in Italy and invited to become Emperor of a restored Mexican monarchy and the good natured younger brother of Kaiser Franz Joseph who was known for keeping his head in the clouds was determined, along with his Belgian bride Carlota, to show the world what they could do. They were young, idealistic and full of hope for the future. They would be the start of a new era in monarchy, raising up a poor country in the New World to its true potential.

Maximilian saw the Mexican Empire rising to become the dominant power in Central America; the linchpin between the United States and the Empire of Brazil which dominated North and South America respectively. As a former Grand Admiral of the Austrian Navy, he also saw Mexico growing in strength to become a full fledged naval power that would rule the Gulf of Mexico. For the time being he needed the help of France, but he proved he was a stooge for no one even though he probably would have been better off if he had been. Yet, the high-minded monarch would not allow anyone to influence him in their own self-interest be it the French or the conservative party in Mexico.Any unbiased observer would have to judge Maximilian as the best ruler Mexico ever had. He was not autocratic, prejudiced, greedy or selfish. He was determined that his monarchy would bring a hereditary stability to a country whose history since independence had been nothing but a long succession of coups, civil wars, feuding elites, rabble-rousing revolutionaries and petty dictators.

Yet, everything in the end depended on the outcome of the Civil War raging north of the border. From the outset the United States was openly hostile to his regime and continued to support the 'government-on-the-run' of the liberal, anti-clerical republican Benito Juarez. The Confederacy was friendly to Maximilian as a potential French ally and offered to recognize the legitimacy of Maximilian's monarchy in return for French recognition of the Confederate States of America. When the Union forces succeeded in crushing the southern Confederacy in 1865 it was the begining of the end for Maximilian and his Mexican Empire.As the USA massively increased their aid to the guerilla forces of Juarez, sending money, supplies, the latest modern weapons and even thousands of "volunteers" to beef up his army they also send a massive military force to the border and ordered the French to leave or face a Yankee invasion. Contrary to their previous agreements the French pulled out just as their forces were on the verge of final victory. Mexicans saw which way the wind was blowing and began to abandon their Emperor and cheer Benito Juarez.

It was at this point that Maximilian displayed his true character and how different he was from the other Mexican leaders who had come before him and who would follow him. Traditionally in Mexico it would have been at that point that Maximilian would have packed up, grabbed all the loot he could carry and taken the first ship back to Europe to live out the rest of his life in luxurious exile. This is what so many Mexican leaders had done before and what others would do after him. Yet, Maximilian refused for his high-born Hapsburg principles would not allow him to abandon his loyalists who would be put to death for his sake nor to abandon his country and his people for whom he had sworn an oath to God at his coronation to serve and protect.Emperor Maximilian left his foreign volunteers behind and led his loyal Mexican troops into a hopeless last stand at the epic siege of Queretaro. Surrounded, outnumbered, out-gunned and out-supplied everyone in Queretaro was impressed by how Maximilian met his most desperate hour. He gave his last bit of money to the poor on the streets, slept on the ground amongst his soldiers, shared their privations and risked his life alongside their own. Finally, the end came through the treachery of a man Maximilian trusted, Colonel Miguel Lopez, known forever after as the Traitor of Queretaro.

Given one last chance to escape by the victorious republican general Maximilian again refused. If his loyal generals were to be shot for his sake he would not abandon them to save his own life. Pleas and appeals came in to Benito Juarez from across the civilized world from presidents and kings and liberals and conservatives alike to spare the life of the noble Maximilian. Juarez would not hear of it. He feared that as long as Maximilian was alive his own power would never be secure, as long as the Emperor lived the flame of monarchy would continue to burn and he was determined to eliminate all resistance to his rule and his vision for a republican Mexico. He gave the order and on June 19, 1867 Emperor Maximilian, General Miguel Miramon and General Tomas Mejia were taken to the Hill of the Bells and executed by firing squad. Maximilian's last words were, "Long live Mexico". The two generals flanking him both died shouting in unison, "Long live the Emperor!" May he rest in peace and may the vision he died for be someday born again in the long suffering land of Mexico.

Posted by MadMonarchist at 12:22 AM