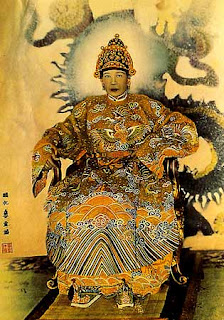 The last Empress Dowager in Vietnamese history, Tu Cung was born on January 28, 1890 to Ho Dac Trung, one-time Minister of Public Instruction. In 1913 she married Prince Nguyen Buu Dao (she was his second wife) who, in 1916, became Emperor Khai Dinh. Over time she advanced in rank and took the name Doan-Huy. Emperor Khai Dinh had two wives, four secondary consorts and ten concubines and elevation depended on who produced an heir to the throne. Doan-Huy had a leg-up going into the Forbidden City in this regard as, the same year she was married to Khai Dinh, she gave him his only son and heir Prince Nguyen Vinh Thuy; the future Emperor Bao Dai. When Emperor Khai Dinh passed away Doan-Huy became Queen Mother or Empress Dowager, traditionally a very powerful position, and she was known as for staunch defense of Viet traditions, court power, her love of gambling and her religious devotion (according to one source she was a priestess of the Cao Dai sect).

This meant that she was often at odds with her more modern-minded, French-educated son Emperor Bao Dai. She did not approve of him having only one official wife, she did not approve of this wife being a Catholic and she did not approve of his western habits. All of this made it very easy for the Empress-Dowager to be criticized then and now, but it must be remembered that she was a product of her own time and place. She wanted to preserve the Vietnamese ways as they had been and her defense of the harem is a simple result of the fact that, under the system she grew up in, this was the only way women attained power and influence at court. Nonetheless, when her son made his decisions she usually went along with them, even if she had first been opposed. He was her son, and he was the Emperor after all; as little political power as he had throughout the country and in the government, behind the walls of the Forbidden City he was still the Son of Heaven, the absolute ruler who must be obeyed without question.
With all the turmoil that gripped Vietnam throughout the 40's and 50's Empress Dowager Doan-Huy remained steadfastly the same as she always had been. Even after the communist takeover she refused to leave her palace quarters and while the Cold War raged outside the thick citadel walls of the "Great Within" her life went on just as it always had. After her son abdicated and was living in France she had on at least one occasion to sell off some imperial antiques to help him pay his gambling debts in Monte Carlo (he inherited his mother's habit). Even as the country descended into civil war she remained in place and as fierce as the fighting was neither side wished to confront the formidable Empress-Dowager.
This stalemate finally came to an end with the famous "Tet Offensive" of 1968 in which the old Imperial capital of Hue was a primary target. Viet Cong troops invaded the Holy Citadel and fierce combat broke out inside the Forbidden City itself. Still, Doan-Huy refused to leave. It was not until the South Vietnamese authorities in Saigon authorized the U.S. to bomb the Forbidden City to eliminate the Viet Cong threat that something had to be done. Defiant to the last, Doan-Huy had to be bundled up in harness on the back of a relative who ran her out of 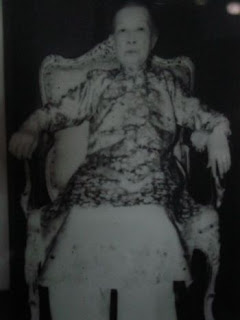 the combat zone on foot. Radio messages were sent to both sides announcing the presence of the Empress-Dowager so she could be avoided. The inner-palace of the Forbidden City was completely destroyed and Doan-Huy spent the rest of the war in a mansion in Saigon and for a time it was the turn of her son to send her money to sustain herself.
After the war and the communist-takeover of Vietnam no one still had any stomach for making trouble with the old woman and for the most part left her alone. Empress-Dowager Doan-Huy returned to Hue and lived in the tomb of her father-in-law, Emperor Dong Khanh, where she carried out the traditional duties of a widow to keep the memory of her venerated husband alive. She remained there and lived to the ripe-old-age of 91 when she died on November 9, 1980.
Posted by MadMonarchist at 10:18 AM