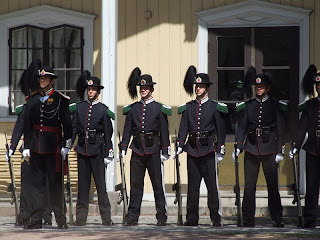 In the Kingdom of Norway the protection of the monarch, royal palaces and the city of Oslo falls on the shoulders of Hans Majestet Kongens Garde (His Majesty the King's Guard). They are a colorful but highly trained and motivated fighting force. The Guard was formed in 1856 during the union of Sweden and Norway when an all-Norwegian company of guards was formed by King Oscar I drawn from the troops of the Norwegian Jaeger Corps. Northern Huseby farm near Oslo was purchased by the government as a barracks for the new unit and it is still the home base of the HMKG to this day. When Norway became independent of Sweden in 1905 King Haakon VII raised the company to the status of a royal guard and increased them in size to a full battalion. That original structure is still maintained as a light infantry battalion in the Norwegian Royal Army. Their distinctive uniforms with their plumed bowler hats were inspired by Italian styles which Princess Louise of Sweden was particularly taken with.

The HMKG has served honorably on numerous battlefields since their formation but never at a more crucial time than during the Nazi invasion of World War II in which the guard fought heroically to prevent the Norwegian Royal Family from being captured by the Germans. Dogged Norwegian restistance caused the Germans to take longer than expected in conquering Norway and the HMKG earned the grudging respect of their enemies. Because of their hard-fighting zeal and dark uniforms the Germans named the King's Guard "the black devils". Most members of the guard today are relatively new recruits in the army but they are drilled to parade ground perfection for the numerous ceremonial duties they are called on to perform. As is the tradition their nominal commander-in-chief is His Majesty King Harald V.

Posted by MadMonarchist at 12:26 PM