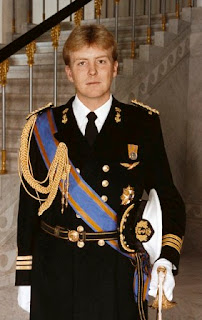 Today is Veterans Day in the Netherlands and HRH Willem-Alexander, Prince of Orange, will be in The Hague to attend official events honoring the 125,000 Dutch veterans. The Prince has undergone his training and service in the Dutch military and has always shown special attention to his future subjects who have served in unform for Queen and Country. Earlier this year, in April, the Prince of Orange made a surprise visit to Dutch troops in Afghanistan which was a great boost to morale. Perhaps this would be an appropriate occasion to comment on the often overlooked but long and disntinguished tradition of military service in the Netherlands. From their first, long, war for independence from Spain the Dutch became renowned military engineers and masters at siege warfare. A past Prince of Orange, Maurice of Nassau, son of Willem the Silent, stands out as one of the greatest generals in military history for his innovative tactics and training methods. On the seas the Dutch have long enjoyed an illustrious reputation particularly the legendary Amiral Maarten Van Tromp who was a great hero in the war against the vile regime of Cromwellian England. Whether their struggles resulted in victory or defeat the Dutch proved their courage on battlefields as far flung as the English Channel to Taiwan. During World War II, caught off guard, the Dutch struggled against overwhelming odds for four days in their homeland and fought a colonial and naval war against the Japanese in Indonesia. It is a little known fact that in the opening days of the War in the Pacific the tiny Dutch submarine flotilla based out of Indonesia actually sank more Japanese shipping than the whole US Navy sub fleet. In more recent years Royal Dutch forces have been deployed to Bosnia, Kosovo, Iraq and Afghanistan where they have participated in several hard-fighting combat operations. The Mad Monarchists salutes the Dutch veterans who have fought and are fighting for their monarch.

Posted by MadMonarchist at 1:22 AM