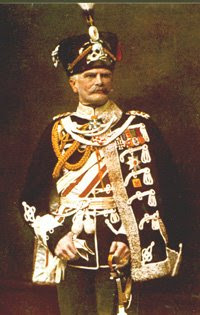 Field Marshal August von Mackensen was one of the most successful commanders of World War I. Born a commoner in 1849 in the Prussian province of Saxony he joined the military and soon rose through the ranks to command the elite Life Hussar Regiment. Justly proud of such an accomplishment, for much of the rest of his life Mackensen could be easily spotted in the black and silver uniform of the Life Hussars. A decorated veteran of the Franco-Prussian War he later joined the Imperial German General Staff and was considered as a potential successor for the famous Field Marshal Alfred von Schlieffen. This was not to be and Mackensen was given a corps command and posted to the 8th Army in East Prussia.

During World War I, Mackensen served entirely on the Eastern Front and was involved in almost every major campaign. By this time his accomplishments had caused him to be enobled as August von Mackensen and he distinguished himself in many victories against the Russians, earning numerous honors and decorations such as the Pour le Merite (aka 'Blue Max'), the Order of the Black Eagle and he was one of only 5 individuals of World War I to earn the Grand Iron Cross. He helped clear Poland of Russian troops, led a multi-national force in the final conquest of Serbia, won victories in Albania and Macedonia. However, he never had contempt for his enemies and even dedicated a monument in honor of the courage of the Serbs who died defending Belgrade.

Promoted to General Field Marshal, probably the greatest moment in the career of August von Mackensen was his part in the near flawless conquest of Romania when that country was persuaded to join the Allies with promises of Hungarian territory. He was serving as a military governor in Romania when the end came and he was captured by the Allies and held prisoner for a short time. After the war, with his active military career behind him, Mackensen became more known on the political scene. He was from first to last a staunch monarchist who supported the return of the German Empire with all of its princes and its Kaiser. He had at first refused to lend his prestige to political causes but this changed as things grew worse in Germany and he could often be seen in his distinctive uniform at conservative-monarchist political functions.

Some have falsely accused Marshal von Mackensen of being a Nazi Party supporter but, although he was sometimes seen at functions of the Nazi regime, this was most certainly not the case. Mackensen openly endorsed and supported his old commander Marshal von Hindenburg for President rather than Hitler and he was a vocal critic of the Nazi Party because of their political killings and massacres in Poland. The Nazi heirarchy would have liked to have gotten rid of him but as the last living Imperial Field Marshal and celebrated hero of the Great War he simply had too high a profile to touch. He also angered Nazi authorities when he appeared in full dress uniform at the funeral of Kaiser Wilhelm II in Holland which Hitler had ordered boycotted. In the end, the monarchist Marshal Mackensen survived them all. He died at the age of 95 in 1945 just after the Allied victory and the collapse of Nazi Germany.
Posted by MadMonarchist at 3:30 AM