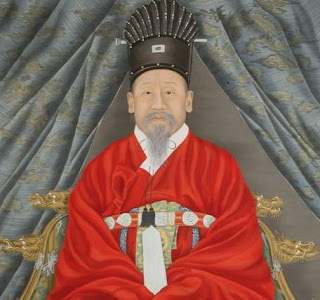 With all of the problems concerning North Korea lately I thought it would be a good time to deviate from my planned blog post and make Korean Emperor Gwangmu the monarch profile for today. Gwangmu (aka Gojong) was the 26th King and 1st Emperor of Korea from the Yi dynasty of the Chosen people. Born in 1852 Gwangmu came to the Korean throne as a child following the suspicious death of the pitiful Emperor Cheolijong in 1864. His father served as regent on his behalf until 1873. During the regency of his father, Prince Heungseon Daewongun, the government of Korea pursued a policy of strict isolation with the western world and carried out a number of persecutions against Catholic missionaries and native converts. These policies led to difficult confrontations, first with the 2nd Empire of France in 1866 and the United States in 1871.

In the years that followe Japan forced Korea to open up and fought the First Sino-Japanese War which effectively ended the era of Korea as a vassal kingdom of the Great Qing Empire. The efforts of Gwangmu to modernize the country caused some problems and overall was a case of 'too little too late' as Japanese power in Korea increased. In 1896 the situation became so severe that King Gojong and the Crown Prince had to flee to the Russian legation in Seoul from which he governed for about a year. The following year Gojong declared the total independence of Korea from China by proclaiming Korea an empire and took the reigning title of Emperor Gwangmu. The Japanese opposed this move and the seemingly close ties between the Korean Emperor and the Russians. From 1904 to 1905 the Russo-Japanese War raged and the resulting victory of Japan spelled the end of Korean independence as Japan forced a protectorate treaty on the empire. Emperor Gwangmu tried to oppose this and attempted to gain international support for the independent Korean Empire but it was to no avail.

Because of his efforts to thwart their domination of his country the Japanese forced Emperor Gwangmu to abdicate in 1907 with the throne passing to his son Emperor Sunjong. In 1910 the last pretense of Korean independence was removed when Japan annexed Korea. Emperor Gwangmu lived under Japanese house arrest at the Deoksu Palace until his death in 1919. Immediately rumors spread that he had been poisoned by the Japanese. In any event, Korea remained a province of Japan until 1945 when the country was partitioned as it has remained ever since. Thus, Emperor Gwangmu was the last Korean leader of a united Korea.
Posted by MadMonarchist at 12:00 AM