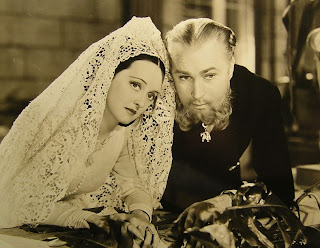 JUAREZ (1939) Starring Paul Muni, Bette Davis and Brian Aherne is probably the most well known film on the subject of the French intervention in Mexico, Maximilian and Juarez. It is a classic piece from the Golden Age of Hollywood and much more than simply a biopic of Benito Juarez. Paul Muni is the intended star as Benito Juarez but it is Brian Aherne as Emperor Maximilian who steals the show and has the most screen time. Muni balked at this and had more scenes for himself put in but lingering on his wooden portrayal only serves to slow the film down whenever he appears. Despite bending the truth considerably to portray Juarez in a favorable light Emperor Maximilian still comes off as a sympathetic character. Also on hand are John Garfield as General Porfirio Diaz and Donald Crisp as Marshal Achille de Bazaine. Claude Rains delivers a typically brilliant and villainous portrayal as Emperor Napoleon III. The film leaves no doubt as to who the viewer is supposed to be rooting for with a succession of ham-fisted efforts to portray Juarez as a secular saint but the character is so dull and the story of Maximilian and Carlota (played by Bette Davis) is so much more interesting that the film really revolves around them. Bette Davis also offers up a brilliant portrayal of the doomed empress and her descent into madness must stand out as one of her greatest moments on film ever. Those interested in the period cannot afford to overlook this film no matter which side you are on in the republican-monarchist debate.
Posted by MadMonarchist at 10:05 PM