Visitors to the magnificent palace complex in Bangkok in the Kingdom of Thailand will be quick to notice the Thai Royal Guards, standing proud and alert in their smart uniforms and spiked tropical helmets. The King's Guard was founded in 1859 by the famous King Chulalongkorn the Great (who was crown prince at the time) who were, at first, little more than servants with ceremonial guard duties who spent most of their time in less than glamorous roles such as scaring crows away. When Chulalongkorn became king he picked the cream of the crop to form a 24-man bodyguard unit for himself known as the Taharn Songlow.

Soon the Royal Guard became an elite unit within the regular Thai Royal Army. In 1870 the King's Guard Regiment was formed and entrusted with the protection of the King and Royal Family, the Royal Palace and providing security for the monarch while travelling across his realm. The Thai Royal Guard are top-of-the-line combat troops and hold the most honored position within the Thai Royal Army. They are a sight to see and of the remaining monarchies left in the world any would be hard-pressed to compete with the impressive ceremony and court ritual still on display in the Kingdom of Thailand. 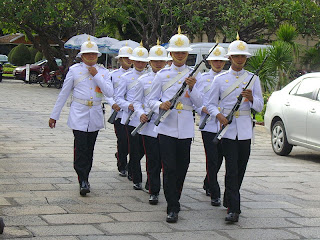