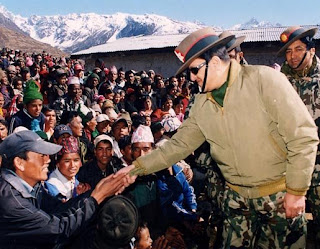 It was on this day in history that HM Gyanendra, the last King of Nepal, came to the throne in 2001 following the infamous "Royal Massacre" in Kathmandu. Obviously, few monarchs and probably none in the world today, have come to the throne under such horrific circumstances. The killing spree that brought down the previous batch of royals is still a subject of hot debate in Nepal today with a great many people denying the official story. However, one thing that should be kept in mind but is often not is that the reign of King Dipendra was not exactly trouble-free. The absolute monarchy had ended, democracy was introduced (King Gynanenda would restore the absolute monarchy as a matter of necessity) and the Maoists who eventually succeeded in bringing down the monarchy were making trouble even under the very popular Dipendra.

The Kingdom of Nepal was in trouble long before King Gyanendra came to the throne, the last in the row of dominoes that were the Himalayan monarchies to fall. 1959 saw the expulsion of the Dalai Lama of Tibet, in 1975 Indian troops conquered the Kingdom of Sikkim and in May of last year the Maoist dominated government of Napal declared their monarchy abolished. It makes one wonder just how nervous the loyal souls of Bhutan must be these days as concerns their own fate, especially with the enforced transition from absolute monarchy to parliamentary democracy. The loss of the monarchy in Nepal was a disaster (for the world) on a number of levels; historical, political and cultural. It saw the death of the one and only remaining Hindu kingdom in the world and it saw the victory of ultra-communist revolutionary republicans of the very worst order. Needless to say things have been chaotic in Nepal ever since. Trying to placate communist revolutionaries is a fool's game; their entire ideology is geared toward totalitarian communist rule and they will never be satisfied with anything less. Compromise is not something they ever enter into with any sincerity.

Posted by MadMonarchist at 9:03 AM