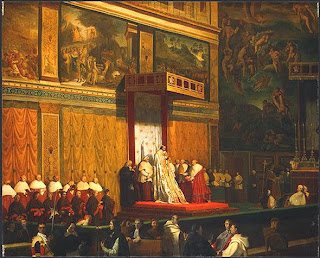 Think religion has no part in politics? Not so:

"We are taught most clearly that the obedience which men are obliged to render to the authorities established by God is an absolute precept which no one can violate, except if by chance something is commanded which runs counter to the laws of God or of the Church...By observing these admonitions the first Christians, even during the persecutions, deserved well of the Roman emperors themselves and of the security of the state. 'Christian soldiers,' says Saint Augustine, 'served an infidel emperor: when it came to the subject of Christ, they recognized no one except Him who is in Heaven. They distinguished between the eternal Lord and the temporal lord, but also were subject to the temporal lord because of the eternal Lord"

Keep in mind that these words were written by HH Pope Gregory XVI to the Catholic bishops of Poland in opposition to their revolt against the Eastern Orthodox Czar of Russia. St Thomas Aquinas called monarchy "the best of all governments" and such sentiments were echoed by Popes such as Pius VI, Pius VII and Leo XIII.
Posted by MadMonarchist at 3:59 PM