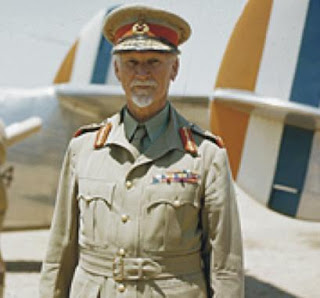 Jan Christiaan Smuts is one of those rare individuals who came to fame as a republican fighting against a monarchy to become one of the most staunch monarchists in the world of his time. Smuts was born in 1870 in the Cape Colony of South Africa and grew up to become a lawyer. At one point he even represented the famous British imperialist Cecil Rhodes, which earned him the criticism of many of his fellow Afrikaaners. In time however, the expansion of British power in southern Africa at the expense of the Boer republics turned Smuts into an ardent enemy of Great Britain and a staunch defender of President Paul Kruger of the Transvaal.

At the outset of the Second Boer War Smuts acted as a liason officer for President Kruger as well as stirring up the Afrikaaner population to support the war against Britain. As the war went on Smuts himself became a front-line soldier and led Boer commandos in numerous attacks and raids against the enemy which would forever change the nature of irregular warfare. Finally, however, the losses of the Boers and the horrific suffering of the Boer civilians the British had herded into concentration camps convinced Smuts that the war should be ended. There were problems with the British rule naturally, but overall everyone was surprised by how well the British treated their defeated foes. In time they would prove as generous in peace as they had been harsh at war and a majority of the Boer population was won over to support the British Empire including Jan Smuts.

The loyalty of the Boers was tested in World War I when South African forces were charged with conquering German Southwest Africa (Namibia) but had to deal with a rebellion in their own country first by pro-German, anti-British Boers. In the end, without the help of outside forces, the loyal South Africans defeated the rebel Boers and then went on to make German Southwest Africa their own colony. Smuts, now a general, then went on to lead the war effort against German East Africa and the brilliantly unorthodox General Paul von Lettow-Vorbeck. Smuts emerged as a British war hero and was a major force in the organization of the League of Nations (no one's perfect) and was one of those who foresaw future problems for Britain with Japan.

Smuts got back into politics in the inter-war years and was a close ally of Winston Churchill and a staunch defender of the British Empire. During World War II he returned to service and became the first South African to attain the rank of Field Marshal in the British army. His prestige had reached such heights that some even suggested him as a possible successor to Churchill as Prime Minister of Great Britain. Supposedly even King George VI favored the idea. He returned to politics after the war again, opposed Ireland leaving the British Commonwealth and opposed India remaining after becoming a republic for fear that it would encourage republicans in his own country which was a horrific idea to the firmly monarchist Smuts. He was prominent in the organization of the United Nations and supported the foundation of the State of Israel. He died in 1950 as one of the most famous and widely respected South Africans in history.