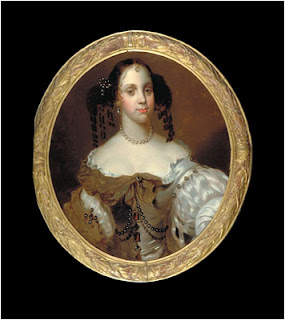 An often overlooked British Queen consort, I think Catherine of Braganza does not get nearly enough credit for the strong woman that she was. The daughter of King John IV of Portugal the Infanta Catherine was married to King Charles II of Great Britain by proxy in Lisbon in 1662 and arrived in London a month later. She faced a great deal of opposition from the outset because of her background. Catherine had been raised in a convent and was a very devout Catholic which the Protestant elites in Parliament did not like at all. However, these were the days when Portugal was at the top of its game and she brought considerable wealth with her in her dowry as well as the exotic ports of Bombay and Tangiers. Charles II himself was not too impressed with her; considering her not especially attractive and too devout for his tastes though he is said to have been taken by her distinctive accent.

As time went on she won more and more people to her side by her simple kindness, support of her husband and her determination to stay out of politics. However, she still had plenty of heartaches as she never had any children while King Charles II continued to father numerous bastards with his small army of mistresses. Queen Catherine was heartbroken and embarassed by this but she never responded in kind and remained a good and faithful wife as long as she lived which impressed many; even the King himself. When Parliament began to pressure Charles to divorce Catherine and marry a Protestant princess who could give him legitimate heirs he firmly refused to. He knew Catherine endured alot from him and while he may not have sincerely loved her, he certainly had come to sincerely respect and admire her and he refused to divorce her. When political pressure continued Charles made it a treasonable offence for anyone to suggest that he divorce his wife or question the succession of his Catholic brother James.

Her most politically difficult moment, without doubt, came in 1678 with the so-called "Popish Plot" which was a Protestant conspiracy to frame the prominent Catholics at court with trying to poison the King. Queen Catherine herself was accused of having a part in it but Charles II defended her himself, he knew it was an absurd charge and in time the charges were proven to be total fabrications. When Charles II lay on his deathbed (where he himself converted to Catholicism) he asked Catherine's forgiveness for his weakness as a husband. She must have been a very forgiving soul as when a rebellion against the new monarch, King James II, under the leadership of the Duke of Monmouth, one of Charles' bastards, she tried to convince James to spare the life of the Duke who was a result of her late husband's adultery.

Catherine had a happy enough life as a widow under the Catholic King James II but when he was overthrown by the Prince of Orange in 1688 her situation grew steadily worse. The Queen had initially been on good terms with the new Protestant monarchs but as the anti-Catholic laws increased she became increasingly treated like a prisoner and was finally obliged to return to her native Portugal in 1692. Nonetheless, she still supported Anglo-Portuguese friendship and even acted as regent of Portugal for her brother King Pedro II. She died in 1705 and is perhaps most remembered today as the Queen who introduced the custom of tea drinking to England.
Posted by MadMonarchist at 10:22 PM