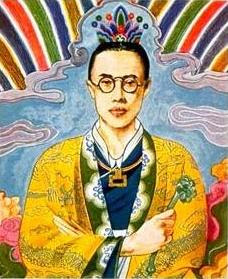 His was a strange and tragic life; for a time the nominal ruler of the world (in Confucian belief) and a recognized emperor for longer than most realized he spent most of his life as a powerless prisoner of the designs of those around him. He was born Aisin-Gioro Pu-Yi, took the English name Henry among his siblings, reigned as the Emperor Hsuan-tung and later as Emperor Kang Teh but thanks to an award-winning film about him he is probably best known simply as "The Last Emperor". A member of the Manchu dynasty little Pu-Yi was born in 1906 to the second Prince Chun and Princess Youlan. When he was 3 years old he was taken to the Forbidden City in Peking. Emperor Guangxu had just died, still locked away by the Grand Empress Dowager Cixi and the aged woman who had dominated China for so long, then on her deathbed, appointed Pu-Yi to be the next Emperor of China with his father as regent. A short time later, in a grand, elaborate Confucian ceremony that was the last of its kind in China, the little boy was formally enthroned as Hsuan-tung, "Great Emperor of the Great Qing Dynasty, Grand Khan of Tartary, the Son of Heaven and Lord of 10,000 Years".

It was not to last long as the Qing Empire was already close to collapse when the Empress-Dowager breathed her last. The end came in 1911 following a double-cross by the General Yuan Shihkai. However, agreements with the new Republic of China allowed the Emperor to keep his titles, a considerable income, his property and to remain in the Forbidden City where he was treated rather like a foreign ruler. As the era of the warlords opened it was a time when everyone in China wanted to keep a foot in every camp. Pu-Yi grew up in isolation, primitive but luxurious captivity. In 1917 he was briefly restored to nominal power by the German-backed Marshal Chang Hsun but promised support from republican officials did not come and the effort collapsed. The Republic of China declared war on Germany a short time later. In 1924 Pu-Yi's life as he knew it changed forever when a socialist and Methodist Christian warlord captured Peking and ordered the Manchu royals out of the Forbidden City. The last Emperor ended up in Tientsin where the Japanese were very friendly and protective of him. He enjoyed living a modern lifestyle but never lost sight of his ultimate goal: to restore the Great Qing Empire.

Pu-Yi kept contacts with numerous Chinese and White Russian warlords in the hope of effecting a restoration but his life as an ex-emperor did not end until 1932 when he was persuaded to go to Manchuria to become the "Chief Executive" of the State of Manchukuo; a Japanese protectorate. In 1934 he was formally enthroned as Emperor Kang Teh of the Great Manchu Empire, however, the League of Nations judged Manchukuo a Japanese puppet state and the only major foreign powers to recognize Manchukuo were the World War II allies of Japan. As politically incorrect as it might be, in light of the post-war history of China and Korea I maintain that it would have been better for everyone if the Empire of Manchukuo could have been preserved but it was not to be. The last Emperor's fortunes were tied to the fortunes of Japan and when the Japanese surrendered he was forced to abdicate and was quickly captured by the invading Soviet troops in 1945.

He castigated the Japanese at the Tokyo War Crimes trials but despite his efforts to ingratiate himself with his Soviet captors he was eventually handed over to the Red Chinese in 1950. For 10 years he was held in a prison for war criminals in Fushun where he was subjected to a decade of "reform through labor". If the autobiography he was forced to write can be believed the indoctrination methods were successful and when he was released he proclaimed himself a loyal communist, grateful to his captors and scorning his past life and imperial heritage. He worked as a simple gardener in Peking for the rest of his life before he died in 1967 during the height of the Cultural Revolution. The government said it was a result of natural causes but rumors spread immediately that he had been killed by the communist authorities as part of their campaign to sweep away the last remnants of "old China" which the Emperor was certainly a living embodiment of.

Despite the best efforts of the communists the idea of the last Emperor as a villain never really took hold. Most today probably view him as a tragic figure but I take a more nostalgic view. It often seems that the world as a whole missed the significance of the fall of the Chinese Empire; an imperial system which lasted from the time of the ancient Greeks until the 20th Century. His life marked the end of an era and the start of a long period of suffering and terror for China. It also marked the end of China as a society based on the moral principles of Confucius. It is debated as to who would be the heir of the last Emperor today. In his book, Pu-Yi wrote that he designated his cousin, Prince Yu-Yan as his successor. He died in 1997 and if his line is accepted the heir to the Dragon Throne today would be his son Prince Hengzheng, aka Yuan Yuan.

Posted by MadMonarchist at 1:39 AM