The Problems in Iran 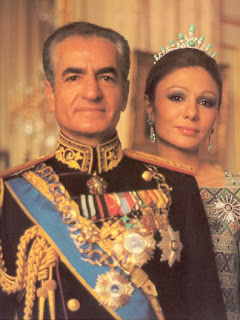 Everyone is talking about Iran right now and a few precious souls are predicting that the power of the Ayatollah might be shaken and regime change could be on the way to the Islamic Republic. Hope springs eternal I guess. The problem, as I see it, is that not only are there relatively few major differences between the two feuding claimants to the presidency; that presidency holds only nominal power anyway and I don't see the "change" crowd advocating the right kind of change. Where are the brave soulds standing up to defend the monarchy of the late Shah? They are out there of course but are given virtually zero face time by the mainstream media. Everyone is talking about the smell of revolution being in the air but what should be talked about is how all of this proves what a disastrous mistake the Islamic revolution was and illustrates the need for a good ol'fashioned counterrevolution.

The son of the late Shah has long been working for "regime change" in Iran though unfortunately he has stopped short of advocating restoration of the monarchy. He has been beating the democracy drum for a while and when pressed on the issue of the monarchy inevitably claims humbly that he would be willing to serve in whatever capacity the Iranian people choose for him once they have a true democracy in Iran. I have the utmost respect for the Crown Prince and at this point almost any change in Iran would bound to be an improvement. However, my fear is that, even if democracy takes root, it will not lead to the restoration of the monarchy and we will see the Islamic revolution portrayed in official histories in the same way that the French Revolution is today.

Consider how often you have read or heard about the French Revolution and the horrific bloodbath that followed. Almost without exception the liberal elites will half-heartedly confess that the Reign of Terror was "unfortunate" but that it was a necessary evil to destroy the monarchy of the ancien regime that is, to them, the ultimate bogey man. My fear for Iran is that, if there is regime change and by some wildly implausible series of events Iran becomes an actual democracy their own revolution will be glossed over in this way as well. Liberal elites will shrug off the horrors and crimes of the theocratic republicans and say that the Islamic Revolution was a sad but essential step in getting rid of the autocratic monarchy to continue down the path to a secular, democratic republic. If anything the people should look at Iran, wake up, and realize that republicanism is not a guarantee of prosperity and democracy is a fickle and fragile thing that can be easily manipulated, suppressed or steered in a chosen direction. All that has happened in Iran in the last few decades should prove that republicanism is a failure and that the Shah had been right all along. His son should be restored asap with the mullah's sincerest apologies. Sounds unreasonable I know, but I am...The Mad Monarchist.
Posted by MadMonarchist at 12:37 PM