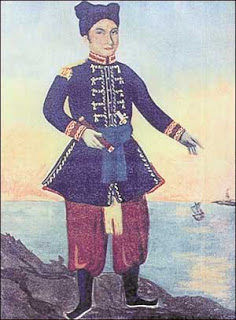 Jean-Baptiste Chaigneau was a French adventurer who played a leading role in the rise to power of the Nguyen Dynasty in Vietnam. Born in Brittany in 1769 he drifted east and was enlisted in the mercenary army of Father Pierre Pigneau de Behaine to fight alongside the forces of Prince Nguyen-Phuc Anh. He came to Vietnam with the padre in 1794 and joined in the grand campaign wherein the foreign troops were particularly helpful in naval and artillery roles and it was in such a role that Chaigneau distinguished himself in the naval attack on Thi Nai.

In 1802 the war ended with success for the Nguyen and Prince Anh was crowned as Emperor Gia Long. The new monarch was a man as generous to his friends as he was harsh toward his enemies and Chaigneau was awarded the rank of a mandarin, roughly in the middle of the scholar-gentry hierarchy of Confucian Vietnam. Chaigneau stayed at court to serve Emperor Gia Long and was soon raised to the status of Grand Mandarin with the honor of a 50-man escort. He also married a Vietnamese lady, Ho Thi Hue, from a prominent Catholic Viet family. As he continued his service he took the name Nguyen Van Thang and was made an advisor to the Emperor who sought to utilize his foreign officials in dealing with the Europeans who were feared as much as admired.

Eventually he returned to France and was made the first French consul in Cochinchina, their name for the far south of Vietnam. However, his situation, and those of Europeans in general in Vietnam, changed with the passing of Gia Long and the accession of Emperor Minh Mang. The new monarch favored closer ties with China and the rejection of all ties with Europe. Chaigneau proposed a treaty between France and Vietnam but Minh Mang rejected it. As tension increased between the court in Hue and all foreigners Chaigneau was finally obliged to leave Vietnam for good and return to France where he died in 1832 in Lorient.
Posted by MadMonarchist at 12:39 PM