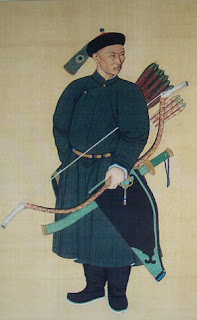 When the Manchurians took power in China and established the "Great Pure Dynasty" they imported their own system of military organization. Known as the Eight Banners the system was designed by the founder of the Qing, Emperor Nurhaci. Based on the tribal-clan structure of the Manchu's nomadic society it allowed large and well trained armies to be gathered very quickly and put directly into action. The Eight Banners included Manchu, Mongol and Han troops though eventually the sheer number of Han soldiers necessitated forming them into their own army. However, the Eight Banners always remained the reliable central core of the Qing Imperial Army. In time they became more professional and more modernly trained. However, from the outset, the Emperor selected the very best warriors from each of the Eight Banners to serve as his guards and personal troops in the Forbidden Purple City. This elite force became known as the Imperial Guards Brigade and they were charged with the personal security of the Emperor and ensuring that no one violated the sacred confines of the Forbidden City and live to tell about it. These forces served throughout the life of the Qing Dynasty and many if not most remained loyal to the Manchu Emperor even after the fall of the dynasty and the establishment of the republic. Many were on hand when the last Emperor was enthroned as Emperor of Manchukuo though in that political entity the Emperor had a new and more modern Imperial Guard that was kept under close watch by the Japanese.
Posted by MadMonarchist at 7:01 PM