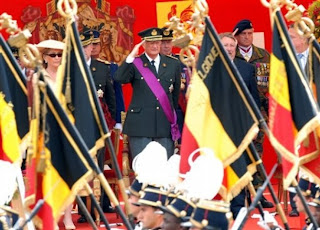 Today His Majesty Albert II, King of the Belgians, turns 75-years-old. He was born in 1934, the second son of HM King Leopold III. He succeeded his older brother as King of the Belgians when King Baudouin died suddenly in 1993. This birthday makes Albert II the longest living monarch in the history of the Kingdom of Belgium. The Mad Monarchist wishes the Belgian monarch a happy birthday. June 6 also marks the anniversary of the Allied invasion of Nazi occupied Europe at Normandy in 1944. Although the U.S. especially has maintained a foreign policy hostile to monarchy it is worth remembering that the Allied war effort (the bulk of which in the west was made up of U.S. forces) liberated and enabled the restoration of the Nazi-occupied monarchies of Monaco, Luxembourg, Belgium, the Netherlands, Denmark and Norway. It is only unfortunate that so many other monarchies around the world were either destroyed by the war or dissolved soon after as a result.
Posted by MadMonarchist at 12:37 AM