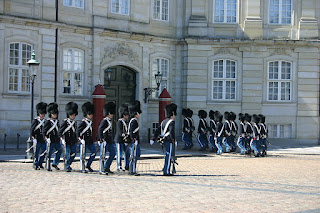 The Danish Royal Life Guards are a unit of the Royal Danish Army charged with the security of the royal family and their residences. The Lifeguard is a palace guard with all of the parade ground precision and spit and polish one would expect of the guardians of Europe's oldest monarchy, however, they are also a front-line combat regiment that serves on Danish military missions overseas. HM King Frederick III founded the Lifeguards in 1658 as a royal body guard and a line infantry regiment. Since that time the Royal Lifeguard has seen service on a wide variety of battlefields in numerous wars throughout the history of Denmark such as the Great Northern War, the Napoleonic Wars, the Schleswig Wars, the German occupation of Denmark and more recently in the conflicts in Afghanistan and Iraq.

While not on active service the Royal Lifeguard provides security details at Hovelte, Rosenborg Castle and Kastellet in Copenhagen and a detachment is always on duty at the primary Danish royal residence of Amalienborg Palace. Sometimes the Royal Lifeguard also stands duty at Fredensborg Palace, Marselisborg Palace, Grasten Palace, Christiansborg Palace and other areas across Denmark as needed. Tourists flock to Amalienborg to watch the changing of the guard and the troops cut an impressive figure in their dark blue tunics, tall bearskin busbies and French sabers. On the rare occasions that full dress is called for they were bright red tunics that cause them to bear more than a passing resemblance to the famous Grenadier Guards of Britain.