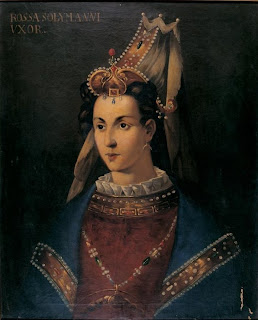 For being the most favored concubine of the most famous Turkish sultan not much is known about the origins of the woman known to history as Roxelana. We do not know her birth name but she seems to have been from what is now the western Ukraine but which was then part of the Kingdom of Poland, possibly the daughter of an Orthodox priest. She was captured by Crimean Tatars in a raid and sold into slavery, eventually passing into the harem of Suleiman the Magnificent, Sultan of the Ottoman Empire. Slavic slave women were actually favored by many Muslim sultans for their harems both for their fair complexions and because of their religion (a good Muslim could enslave a Christian and not feel bad about). However, Roxelana was not to remain a lowly concubine for long. Her beauty quickly attracted the jealousy of the other women in the harem as well as the attentions of the sultan who was very taken with her.

Sultan Suleiman was quite the smitten kitten and Roxelana's enemies became his enemies. When the Sultan's formerly favorite concubine (and mother of his son and heir Prince Mustafa) attacked Roxelana Suleiman had them both exiled. Eventually he had his son Mustafa killed, an act for which Roxelana is usually blamed with instigating. In quick order Roxelana was raised from the status of concubine to that of legal wife to the Sultan, an unprecedented act for European slave girl. However, she seems to have generally used her position for benevolent purposes. She is most famous for her patronage of the arts and for building. She also gave Suleiman five children and it would be one of her own, Selim, who would one day succeed his father.

As a freed woman and legal wife of the Sultan, Roxelana seemed to have immense influence. She advised him in many areas, including foreign affairs and, not forgetting her origins, she wrote letters to King Sigismund II Augustus of Poland and helped keep the peace between the two countries as well as convincing the Sultan to crack down on the Crimean slave traders who had once captured her. She was responsible for the building of a special women's hospital near the women's slave market and was patron of many other charitable works across the Ottoman Empire. Among these were a mosque and two religious schools in Istanbul as well as a bath near the Hagia Sophia and she built the first public soup kitchen in Jerusalem. She was also famous for her patronage of the arts and for her own embroidery which was often sent to foreign leaders including the King of Poland and the Shah of Iran. As the favorite of the Sultan there was nothing he would deny her and when she died in 1558 she was buried in an extremely elaborate mausoleum next to that of her husband in the Suleiman Mosque.

Roxelana's story, from captured slave girl to favored wife of a Sultan, is made to order for romantics and has inspired a great deal of artistic expressions across Europe and the Middle East. Novels, poems, songs, paintings, ballets, plays and whole operas have been written or painted about her. As recent as 2007 a new mosque in Mariupol, Ukraine was named in her honor.
Posted by MadMonarchist at 12:29 AM