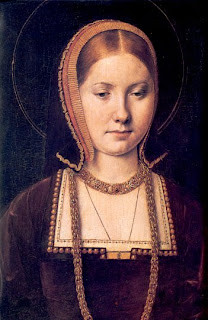 One of the greatest English queen-consorts and a longtime favorite of mine Queen Catherine of Aragon was a 'woman among women' and it would be hard to imagine how she could be capable of such inner strength, such devotion, tenacity and even forgiveness and even fighting spirit without keeping in mind that she was very much her mother's daughter and that mother happened to be the formidable Queen Isabella of Castile. She was born in 1485 even as her parents Ferdinand of Aragon and Isabella of Castile were fighting the last battles of la Reconquista; the longest war in history, to liberate Spain from the Moors. From an early age her character was shaped by two guiding forces; her fervent Catholicism and her betrothal to HRH Arthur, Prince of Wales, son and heir of King Henry VII of England. She thus saw it as her lifelong destiny to be Queen of England.

Unlike other girls of her era Isabella inisted that Catherine be extremely well educated and capable of being a monarch in her own right as she was. In 1501 Catherine and Arthur were married, both at a very tender age, but the two never lived together fully as husband and wife before Prince Arthur died of disease in 1502. This left Catherine in limbo and soon she was reduced to poverty at the hands of her miserly father-in-law. This only changed when King Henry VII died and his younger son became King Henry VIII. The new monarch decided that he would marry Catherine and after obtaining a papal dispensation the two were wed in 1509. From her first arrival she was beloved by the English people and their esteem for her only grew over time. As Queen consort her primary duty was to produce an heir to the throne but this proved extremely problematic. In 1511 she gave birth to a son but the boy, named Henry after his father, lived for only 52 days.

Nonetheless, Catherine was a hard working, learned and religious Queen who quite capably acted as regent for her husband while Henry VIII was away on the continent renewing the war with France. It was during this time that the Scots under King James IV invaded northern England and Queen Catherine met the crisis with courage and cool determination that would have made her mother proud. The army she sent north inflicted a crushing defeat on the Scots at the battle of Flodden in which James IV was killed. Catherine sent her husband the cloak of the late King of Scots as a trophy of her victory in his absence. She was also constantly furthering her own education and growing in her own faith. Yet, bearing children continued to be problematic. Numerous painful pregnancies ended with only one surviving child, Princess Mary, who was Catherine's pride and joy.

Eventually Henry, who had numerous mistresses, became infatuated with Ann Boleyn (sister to one of his previous mistresses) but Ann was not content to be used as her sister had been and demanded that Henry make her his wife and queen. Doubts were cast on the validity of his decades long marriage to Catherine and Ann also introduced the King to the new religious ideas of Protestantism of which he particularly favored the theory that the King, rather than the Pope, held final power over the Church as well as the state. Finally, Henry, who was totally infatuated with Ann Boleyn, became determined to divorce his older and long suffering wife and demanded that Catherine go away quietly and agree to an annulment by the Church. Catherine bravely refused, not only for herself, but to protect her daughter from being declared a bastard. Knowing that the clerics in England would bend to Henry's will (as all but the Bishop of Rochester did) she appealed her case to Rome and Pope Clement VII.

At the time Rome was occupied by the forces of the King of Spain and Holy Roman Emperor Charles V, who happened to be Catherine's nephew. Obviously the Pope was not eager to risk the wrath of Charles but he also did not want to offend Henry who had heretofore been a loyal if not devout Catholic; who had even been given the title "Defender of the Faith" for his vehement condemnation of Lutheranism. In the end, the facts could not be denied and the Pope ruled in Catherine's favor. In the eyes of the Church she was Henry's true and only wife till death should they part. Henry VIII was not a man to be thwarted however, and though Catherine had seemed to win the day, he did something no one had thought he would have ever dared to do. Henry VIII broke with Rome and declared himself Supreme Head on earth of the Church of England. The people were outraged and the vast majority sided with Catherine as the faithful wife who had been wronged. They had nothing but hatred for Ann Boleyn whom they regarded as a home-wrecker who had bewitched the King in her ambitious grasp for the role of Queen.

Undoubtedly Catherine could have commanded a significant rebellion on her behalf by her sympathizers and those who refused to give up the Catholic faith in favor of the new government religion. Emperor Charles V also promised to invade England at once should his beloved aunt only give the word but this Catherine refused to do. Even while she was locked away under house arrest she refused all offers of rescue or rebellion on the grounds that she would not be the cause of any further suffering on the part of her English people. To the frustration of Henry, however, she refused to stop calling herself his true wife and Queen. Kept away from her daughter she finally died in 1536, forgiving Henry and worrying for his salvation with her last breaths. The King buried her as a dowager Princess of Wales rather than a Queen of England. He did not attend the funeral nor would he allow their daughter to. Catherine's life was over but her influence would be felt in English history long after her death even if she is one of the more overlooked of the famous 6 wives of Henry VIII.
Posted by MadMonarchist at 12:10 AM